At least nine nationally threatened red-billed gulls were shot, stomped, run over or left for dead in a ‘‘cowardly, cruel and malicious’’ attack in Kaiko¯ ura. Kaiko¯ura Wildlife Rescue manager Sabrina Luecht said she was called about 10am on Sunday after tourists and children found maimed living birds among the corpses at the wharf on Avoca St, south of the town centre. The birds had chest and wing wounds consistent with having been shot and most had impact injuries like bulging eyes and protruding intestines, she said. The killings likely took place in the early hours of Sunday morning. ‘‘It appears the birds were shot with an air rifle or the like ... and then either run over with a vehicle or stomped to death by foot. ‘‘Those birds are really active at night because there are lights there and they roost right there. That, to me, means it’s a local, and very few tourists would travel the country with an air rifle.’’ Police have been notified of the killings, which were illegal under the Wildlife Act 1953. A police spokeswoman said the Department of Conservation (DOC) would lead an investigation but police could get involved to assist or make any arrests, depending on the circumstances. Luecht said a DOC staff member had been on site and thought the birds may have had their heads stood on. ‘‘I don’t know if that was for fun or to stop them squirming after they’d been shot, or they drove over them. It’s pretty gruesome either way, I don’t know how you can do that and feel OK. ‘‘It wasn’t that other people had accidently driven over them. There was a cluster of them and you could very much drive around either side of them.’’ Luecht found eight birds already dead when she arrived and had to euthanise one due to its injuries, but ‘‘the count will be higher’’. Guests at the nearby Pier Hotel, who had initially reported the crime, had seen more injured birds which had fled by the time she got there. Many people viewed gulls as pests but this was incorrect, Luecht said. The species was a New Zealand native, protected by law and listed as ‘at risk’ in the New Zealand Threat Classification System. According to Luecht, the redbilled gull population declined by 51 per cent between 1983 and 2005. Kaiko¯ura remained a stronghold for the species, ‘‘but even here they continue to decline’’. ‘‘Ironically, Kaiko¯ ura is considered a tourism hot spot due its wildlife drawcard. It is sad to see tourists, including children, witnessing such disturbing sights. ‘‘This is a cowardly, cruel and malicious illegal offence ... If a person is capable of something as barbaric as this, what else are they capable of?’’ In 2014, the red-billed gull was declared ‘‘nationally vulnerable’’ by DOC report. Numbers had been falling sharply at the three main breeding colonies – one of which is the Kaiko¯ ura Peninsula – and were expected to drop by between 50 and 70 per cent over the next three decades. The same report deemed the black-billed gull ‘‘nationally critical’’, putting it alongside the kiwi and kakapo on conservation lists. Anyone with information should contact the Kaiko¯ura DOC Office. Suspicious activity regarding wildlife, or people finding injured animals, should call the DOC Emergency Hotline on 0800 362 468. 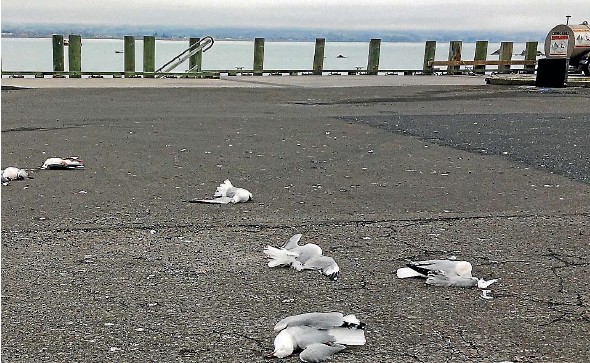