Landowner Paul Harnett feels he has been betrayed after a huge pile of tyres appeared on his Mt Fyffe Rd farm. The tyres have been accumulating over time but it was not until recently that they were noticed by Paul’s daughter Biddy when she visited the hay shed on the property. There are now an estimated 200 to 300 in the pile, clearly dumped by a commercial operator. Harnett said he considered it a real betrayal by someone from within the local community. ‘‘Sadly this will be the work of someone I know, who has taken advantage of my absence and the disruption on the farm and the community since the earthquake,’’ he said. Environment Canterbury (ECan) Kaiko¯ ura manager Kevin Heays said he was incredibly disappointed in the dumping, which sadly was not an isolated incident. ECan enforcement officers would welcome any information, he said. ‘‘It’s obviously incredibly disappointing and clearly from a local commercial operator. ‘‘Currently [tyre disposal] is not regulated, only recommended, although there are moves afoot to get more regulation around it.’’ There was also a ‘degree of confusion’ around local collections, he said. Kaiko¯ ura Police are also keen to hear from anyone with any information. A spokesperson said without proof it was very difficult to prosecute, however potential charges under the Litter Act meant an individual could be fined up to $5000, while a corporation could be liable for up to $25,000. ‘‘There is a tyre shredding company that comes up from Christchurch so there are no excuses for this,’’ he said. ‘‘I am disappointed in our community and we will be continuing to investigate.’’ One problem was the fact that service stations were not obliged to keep records of tyre disposal, which he said was disappointing from a police perspective. Illegal dumping is not a new thing in Kaiko¯ ura — tyres have been dumped in several different locations for years, along with household waste, old TVs and plenty of carcasses in waterways, including a beheaded deer in a stream near the High School two months ago. 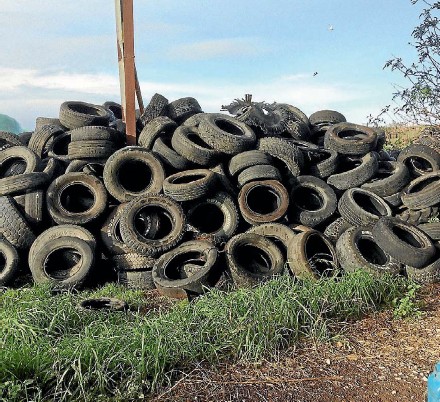