Kaiko¯ura hostess bows out at 88

She is the hostess with the mostest and has certainly met some characters in her many years running her bed and breakfast on Kaiko¯ ura’s peninsula. But Margaret Woodill has finally decided it’s time to hang up her apron and start taking life a little slower now she is nearly 90. Margaret has tallied up all her guests over the years, totalling a staggering 13,383 guests. That means she has cooked at least that many full English breakfasts, and that’s not even taking into account all the home-made bread she has baked in that time. The business started in 1986, in the days before Whale Watch and the international tourism which came with it. Bayview B&B was the first Kaiko¯ura accommodation business in the New Zealand B&B Book, and the first to advertise to overseas visitors. And it will be this mixture of guests which she will miss the most. Although she recalls some she won’t miss, including one man in his late 70s who was referred to her from the cafe in town, took her backpackers room and ended up wandering the streets with no pants on. ‘‘I remember having my hair cut the next day and being told ‘everyone’s talking about a man in town with no trousers on’. I have to admit I kept quiet about him being my guest!’’ With the man staying for a second night, Margaret took herself off to bed early to avoid any awkward conversation, but soon heard him talking in the other room. ‘‘It turns out he was on talkback radio, talking about Kaiko¯ura even though he had nothing to do with the place!’’ As well as some unusual individuals, Margaret also remembers some lovely coincidences, not least of which was the time a couple reconnected with friends they had lost touch with after finding their names in the B&B visitor book. One guest found an engagement ring tucked down beside the skirting board and Margaret was able to reunite it with its very relieved owner, with help from the local police. She has witnessed weddings, had offers from people wanting to adopt her, and befriended countless guests, many of whom have become regular guests over the years. And then there was the poor couple who went for an innocent walk around the peninsula only to have Margaret’s husband start a search and rescue mission after the failed to come back for their car. As it happened they were simply out on a walk around town, and were quite surprised when they were ‘found’ by one of the search party. One man came out from the UK to have a break after losing his wife, and confessed to Margaret he was so miserable he was planning on cutting his trip short. But he had such a good time on his stay in Kaiko¯ ura that he saw out the rest of his holiday and ended up meeting his future partner on the plane on his return to the UK. Hosting international guests also comes with its fair share of funny moments, many resulting from a language barrier. ‘‘I remember we had one old Japanese man staying who asked me why eggs are free in New Zealand after reading a ‘free range egg’ sign,’’ she laughs. Then there was the time one of her chickens wandered through the house while she was having dinner with some guests, and the time UK cricketer Stuart Broad’s father came to stay, followed by a subsequent cricket fan taking a photo of Broad’s visitor book entry so he could show his friends. While she has mixed feelings about bringing the business to a close, Margaret said at 88 she was relying on daughter Nicky to do the cleaning and internet bookings more and more. ‘‘It filled a big gap after my husband died 20 years ago, and it’s honestly been the most enjoyable job I’ve ever had.’’ 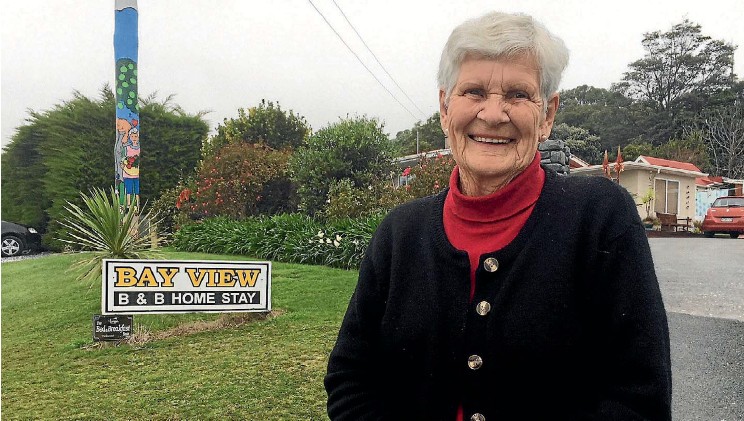