One hundred and nine years after a Kiwi last won an Olympic medal in tennis, Marcus Daniell and Michael Venus have a chance to emulate that success. New Zealand has never had much to celebrate in tennis at the Olympics, apart from Anthony Wilding winning a bronze medal in 1912. However, at that Olympics in Stockholm Wilding, who was killed three years later in the World War I, competed for Australasia as New Zealand didn’t compete at the Games as independent nation until 1920. Wilding won a bronze medal in the indoor men’s singles, which was played on wood and since then even having a New Zealander play tennis at the Olympics has been a rare occurrence. But in Tokyo, Daniell and Venus will be genuine medal prospects in the men’s doubles. They’re optimistic about their chances, starting with their first round match against Belarusians Egor Gerasimov and Ilya Ivashka, which will take place either tomorrow or Sunday. Since the last Olympics, where they lost a third-set tiebreak in the first round to Canadians Vasek Pospisil and Daniel Nestor, both have improved as doubles players, particularly Venus, who has gone on to win the French Open in 2017 and reach the Wimbledon final in 2018. ‘‘My game has improved in just about all areas,’’ Venus said. ‘‘If you’re not improving then your ranking is going to go backwards. ‘‘So you’re constantly having to get better with everything you do out there. But also, since then, having that belief that I can win big tournaments and be there at the end of them, definitely helps. ‘‘That’s something we can hopefully feel good about, that we’re not just there to play and be a part of it, but to try to get a medal and we both think we’ve got a good shot to have that opportunity if we play well.’’ Although Daniell and Venus don’t play together regularly on the circuit, they know each other well and team up for Davis Cup ties. Daniell feels that this, along with what both players bring to the table with their game styles, should stand them in good stead. ‘‘He’s got huge shots and he’s intimidating when he’s connecting,’’ Daniell said of Venus. ‘‘I am bit more of a handsy sort of player and try to use the angles and touch. ‘‘The combination of those things on one side of the net can be pretty hard to deal with. ‘‘Communication and team chemistry is a big factor in doubles and the fact we get along well off court, know each other on court, keep that energy high regardless of the situation, gets a lot of teams through dicey matches. ‘‘The fact is, if you’re going to get to the end of the Olympics and play a fifth match, you’re going to have to go through some dicey situations, so that energy is going to keep us in good stead.’’ Olympic rules for mixed doubles at the Games state that for this draw both players must already be in another draw, either singles or men’s or women’s doubles. Because of this, Venus isn’t able to team up with Erin Routliffe, who is ranked 132 in the world in doubles and had some impressive results recently. The next highest ranked New Zealand player is Paige Hourigan who is ranked 251 in singles and 420 in doubles, which meant they were well away from making the cut. If Routliffe and Venus could have played together, they also would have had the potential to go deep in the draw. ‘‘It’s one of those things that’s outside of our control,’’ Venus said. ‘‘I would have loved to have played another event and play with Erin. She’s a great player. ‘‘It’s unfortunate, but that’s how it’s set up. You never know, in the future that could happen.’’ 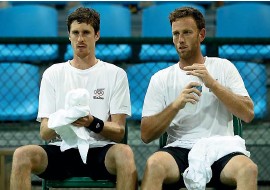