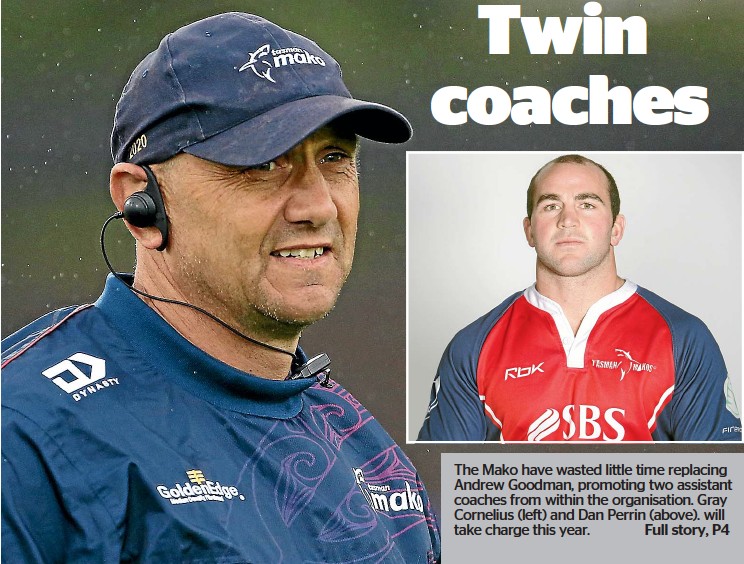 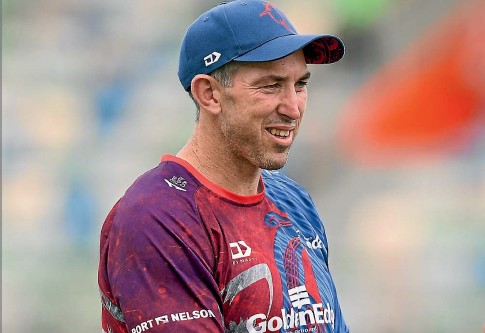 The Mako have wasted little time replacing Andrew Goodman, promoting two assistant coaches from within the organisation. Gray Cornelius (left) and Dan Perrin (above). will take charge this year. Gray Cornelius and Dan Perrin will co-coach the Tasman Mako the next two seasons. Having worked as assistants under departing head coach Andrew Goodman, Tasman confirmed on Wednesday that the pair have been promoted on twoyear deals. It marks a return to the cocoaching model, something Tasman used in 2019 and 2020, when Clarke Dermody and Goodman guided the team to back-to-back NPC titles. The day after it was announced Goodman and assistant coach Shane Christie would not return, Tasman boss Lyndon Bray said it was a ‘‘no-brainer’’ to promote the pair. ‘‘I’m really excited by that, because I think we’ve got two guys who have been very intimate with the Mako structures and the culture that has been built within that team, and they’ve helped enhance that the last couple of years. ‘‘So our decision was very much based around the fact we’ve got two guys who I think are just rock solid together. They’re quite different personalities with different skill sets, which I think is what’s real important when putting two guys together.’’ Perrin – who played 29 games for Tasman in the front row – and Cornelius both came on board as Tasman assistant coaches in 2019. The departure of Goodman and Christie, which followed Dermody’s after the 2020 season, marks a new era for the Mako, who will announce new assistant coaches during the next few weeks. ‘‘I guess there is a reality around the fact you’ve got two guys that, yep, have been a part of it, but they’re going to be head coaches, and they’ve got to put their own stamp on that. That’s important because they’ve got to be their own people and take it in the direction they believe in,’’ Bray said. ‘‘At the same time, they have been part of that process the last few years, Dan was a Mako player, Gray has come through our systems through quite a few years . . . so you’ve got two guys who intimately understand the Mako methodology, and I felt that was really important.’’ Bray confirmed Goodman’s and Christie’s departures were ‘‘purely about their Super Rugby workloads’’, saying Tasman were blessed to have had the pair for as long as they did. Crusaders and Samoa assistant Goodman was a member of the Mako coaching staff for six years, while Highlanders defence coach Christie was on board the last four campaigns. ‘‘It just got to a point where I would be very worried, particularly for Goodie, that he would just burn out if he kept doing our role on top of all those other roles,’’ Bray said.