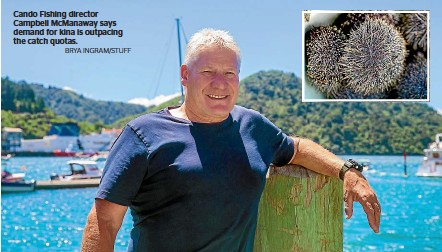 Campbell McManaway steamed out of Bluff Harbour headed for Dusky Sound to fish for kina, unaware of the regulatory storm awaiting upon his return. The fisherman found himself in a three-and-a-half year, $350,000 dispute with the Ministry for Primary Industries, after processing kina at sea in Fiordland in June 2018. At a trial in Invercargill in November 2021, McManaway faced six Fisheries Act charges and his company Cando Fishing faced the same six charges, plus an additional charge laid under the Fisheries (Commercial Fishing) Regulations. Judge Russell Walker reserved his decision at the end of the trial, and dismissed all the charges because they were not proven against McManaway or the company, in a decision released in late December. In the midst of the legal dispute, McManaway was going into debt, paying up to $40,000 a month in legal fees and thinking about leaving the industry. On June 28, 2018, McManaway’s 65-foot FV San Nicholas left Bluff for the 20-hour journey to Dusky Sound. Once at the fiord, the kina was processed onboard, put in pottles, helicoptered to Te Anau and then transported to Bluff. The essence of the MPI case was that Cando Fishing could not process at sea, because it could not ‘‘land’’ the kina to itself as a Licensed Fish Receiver because Cando’s fishing permit only allowed them to land fish at the specified place on their licence. Further, in its capacity as a Licensed Fish Receiver, fish could only be received at its registered premises in Bluff or Picton. McManaway and the company’s charges related to making a false or misleading statement and failing to ensure the shellfish remained unshelled. The prosecution case was that the unloaded dockets and purchase invoices did not match what was happening and would have prevented fishery officers from understanding what was happening onboard, the judge in his decision says. The prosecution also maintains that kina, because it does not have a conversion factor cannot be processed at sea, as it is then not possible for a fish receiver to calculate the green weight of the whole fish. The ministry also argued kina could not be ‘‘landed’’ in a processed state, for a number of reasons, including the Fishing Regulations which prevented the landing of dead or processed shellfish. The crux of Cando Fishing’s case was where the line was drawn between the company wearing its hat as a fisher and wearing its hat as a Licensed Fish Receiver. In his decision, Judge Walker says landing of the kina on the San Nicholas indicated the defendant was no longer acting as a commercial fisher and was now acting as a Licensed Fish Receiver. Given that, it was clear the kina were not unshelled before they reached the first point of sale, Judge Walker says, and the charges were not proven and accordingly dismissed. McManaway, who was preparing to go back to sea from Picton on Tuesday, reflecting on the case, questioned why MPI had made his life a misery for a weak case. MPI acting deputy DirectorGeneral of governance and compliance Gary Orr said the ministry was yet to consider the judgment. ‘‘It requires a lot of work to bring a prosecution before the courts and MPI has to be comfortable there is sufficient evidence beforehand. It’s an action we don’t take lightly. ‘‘The decision to prosecute is made following guidelines from the Solicitor-General,’’ Orr said. It is unknown if MPI will appeal. McManaway said now the case was over, he felt re-energised and wanted to do a two-year development programme with National Institute of Water and Atmospheric Research (Niwa) scientists in Fiordland, to figure out a sustainable kina quota for the area. McManaway left school in 1978 at 15 years old to fish crayfish and blue cod with his dad. In 1987, kina was worth $10-per-kilo, and the price currently sat at $140/kg, he said. Now Cando Fishing’s $1.5m fleet of nine boats in Marlborough and Bluff work to fill half of the annual national 1100 tonne kina quota. The work cars have SUR number plates; the code for sea urchin. McManaway met his lawyers on Tuesday to discuss applying to recover costs from the Ministry, but had yet to make a decision.