Covid aside, plenty of hurdles ahead 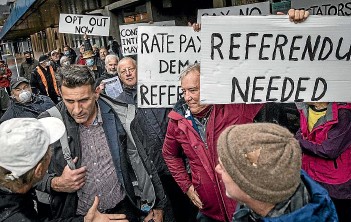 OPINION: Over the past 12 months, one thing that has definitely changed is the appetite for risk among those in power. On both sides of the Tasman, senior politicians appear to be intent on relaxing international borders and removing restrictions on business, all but regardless of whether the health systems in either country are sufficiently equipped and staffed to cope with major community outbreaks. Thankfully here, the Ardern government’s previously cautious approach – combined with the ongoing rollout of vaccines, booster shots and a vaccine for children – has prepared the country as well as possible for whatever 2022 may send our way. Come April, our borders are due to be gradually opened up. Hopefully, the debacle in the availability and affordability of rapid antigen test-kits that we’ve seen in Australia can be avoided here. Covid aside, the middle year of a parliamentary term is usually when governments aim to push their major policies through Parliament and into legislation in time for bragging rights during the following election year. However, local government elections occur this year, and the Three Waters proposal is looming as a gift issue for populist candidates hoping to ride voter resentment into office. However, the protests against Three Waters may well have peaked too soon. Arguably, there will be enough time now for voters to realise that more bursting water pipes, further deterioration in the standard of drinking water, and even higher rates increases are the likely outcome if the Three Waters plan for investment in water infrastructure is allowed to fail. Currently, Labour still seems determined to push on with Three Waters this year, rather than allow the issue to dominate election year 2023. Largely thanks to last November’s changes in the banks’ lending criteria, house prices are likely to flatline in 2022, thereby taking some heat out of what has been a recurring political flashpoint. Several different housing markets will emerge in 2022, with top end buyers being less affected by the new lending rules and by the tiny flurries of interest rate increases. Ironically, that same tightening of the banks’ lending criteria could make it just as hard for less wealthy home seekers to enter the market, even if the headline prices appear to have come back more in reach. Around Parliament, much of the chatter this year will be emitted over how well or how badly National Party leader Christopher Luxon is performing, and the extent to which National is continuing to erode support for the Act Party. By year’s end, it seems likely that Act will be mirroring the Greens, at a more realistic 7-10 per cent in the polls. Since political forecasts tend to be on the gloomy side, lets close with predictions for 2022 from a different class of soothsayers. According to the astrologers, the ‘‘love planet’’ Venus and the ‘‘sex planet’’ Mars will be coming together in the zodiac on February 16 and again, on March 5. As one astrological pundit has noted: ‘‘This steamy planetary connection usually only occurs every other year or so, but this year it’s happening twice – which doubles our chance to align our romantic values with our passionate desires.’’ At last, some good news.