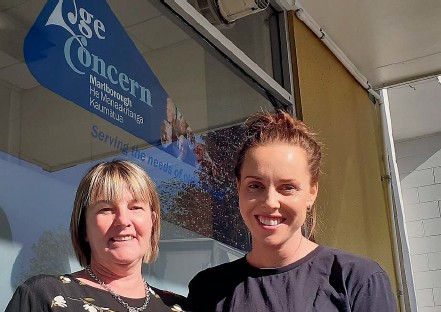 feeling of self-worth which could often result in self-neglect. ‘‘When people start withdrawing from the community you can usually notice it. You see people just really not looking after themselves, not eating properly, not dressing properly, just people struggling to look after themselves in general,’’ Houlahan said. Jones said she consulted her pool of volunteers to find suitable pairings. ‘‘If we’ve got a gentleman who was an engineer, we’d match them with those with similar interests who can help them get out and about, go for a walk, help with shopping, or just go for a drive. ‘‘It really helps people to get out of the house and socialising again. People thrive off social connections, and they really need it,’’ Jones said. Houlahan said people’s modern lifestyles had increased the sense of loneliness among the elderly. ‘‘Historically, families lived close by to each other with Nana living just up the road, and family would pop round daily to see them and take them dinner and things. ‘‘But nowadays, people tend to travel around a lot more, move around the country for work or lifestyle changes, often leaving family behind,’’ Houlahan said. People feeling lost after losing their partner was also a common factor in the elderly suffering loneliness, isolation, and depression, Houlahan said. ‘‘We get a lot of people who have been married all their lives and then lose their loved one and they no longer know what to do. ‘‘Whether it’s learning to cook for themselves, after their partner used to always cook, or doing the garden alone when they used to do it as a couple, some people just need help with the little things in life,’’ Houlahan said. Volunteer Noella Batchelor said she decided to get involved with the visiting service after leaving her job as a caregiver, and had befriended an elderly gentleman who needed help with his laundry. ‘‘I go around once a week and hang his washing out, that’s all he needs help with, but we often sit down and have a natter. It makes a big difference, especially if people can’t get out of the house,’’ Batchelor said. Fortunately, despite the forced-closure of many social events due to Covid, Age Concern Marlborough had been able to continue its monthly Friendship Group, which offered morning tea, guest speakers, music and entertainment, and the chance to socialise and meet new friends. Other events in the pipeline included Tea and Tech sessions to help the elderly master modern technology and a walking group. Jones said Age Concern was always looking for more volunteers to become befrienders, and join its Accredited Visiting Services. ‘‘It’s great for job satisfaction, and maybe volunteers are a bit lonely too ... Quite often what comes out of it are really nice friendships,’’ she said. Anyone interested in becoming a volunteer befriender, and helping the region’s elderly, can call Age Concern Marlborough on 03 579 3457 or visit facebook. com/ageconcernmarlborough