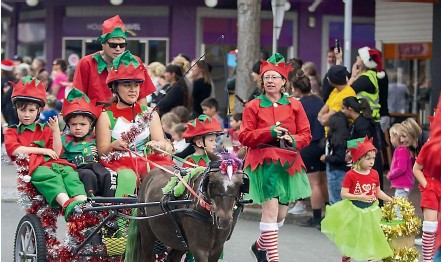 Santa Claus is (still) coming to town, despite a change in who’ll host him. That’s because Blenheim’s much-loved Christmas parade will have new organisers this year, after events company Marlborough 4 Fun last month called it quits after 23 years. The organisation delivered a variety of community events in the region such as the Christmas Parade, Ignite Marlborough (Picton’s New Year’s Eve festival), and Southern Jam, a South Island-wide youth jazz festival. But on the streets of Blenheim, people were sharing their memories of Christmas (Parades) past – food for thought for the new organisers – and looking forward to this year’s edition, which the Marlborough District Council confirmed would go ahead. Chris Lippiatt said his best memories of the event were when he was a young kid, ‘‘because it was a big thing, it was like Christmas is coming’’. ‘‘What you’d do, you’d research the parade map beforehand, because you wanted to be standing right at the start of the parade to watch it all go through and as soon as it does, you’d run through the backstreets and get to it as it’s going out, so you can get more lollies,’’ he said. Lippiatt thought the parade was an important community event that ‘‘doesn’t ask anything of you, other than just to attend’’. ‘‘Which especially with the current financial way things are, that’s good, bring some joys of Christmas without any cost,’’ he said. Lippiatt played the jolly big man himself in the ‘‘Santa on tour’’ event last year, the Covid19 friendly alternative which went around neighbourhoods in Marlborough after the 2021 Blenheim parade was cancelled. ‘‘So that’ll be probably the best memory I think I’ve ever had, cause that was just insane, it was four evenings in a row, Christmas music just blasting in my ears,’’ he said. Anna Bongers said her favourite parts of previous parades had been seeing floats with people handing out lollies, children on roller skates and marching teams. ‘‘It’s really cool, everyone is really cheerful – and it gets the children’s attention because they say ‘I saw Santa’ or ‘I saw a reindeer’,’’ she said. Stacey Brown, who was originally from South Africa and was now living in Marlborough, said she remembered her first time attending the Blenheim parade several years ago. ‘‘I think for me as an outsider coming from South Africa, it was interesting to see what the community has to offer, seeing what Marlborough has to offer,’’ she said. ‘‘It’s really good for the kids to get out and about in the community as well, I think it’s a good way of getting people together.’’ The Christmas parade and Ignite Marlborough would be delivered through the Marlborough District Council in 2022. It wasn’t clear if that would be contracted out, but a council spokesperson confirmed the parade would go ahead this year, along with Ignite Marlborough. Council economic, community and support services manager Dean Heiford said it was important these events continued. ‘‘These are much-loved community events and essential elements in Marlborough’s Christmas and New Year celebrations,’’ he said. Heiford said while the contract between council and Marlborough 4 Fun was due to conclude next year, the resignation of its general manager had led to the trust reviewing its operations. ‘‘Marlborough 4 Fun has done some wonderful work in our community over the last two decades. However, over the past two years the pressures associated with Covid-19 have made gaining sponsorship and running events incredibly difficult,’’ he said. One event Marlborough 4 Fun had been in charge of organising had been axed this year though, the Southern Jam Youth Jazz Festival. ‘‘Sadly, we will not be able to put on Southern Jam this year. That is very disappointing news for everyone involved, but it was too late in the planning cycle to be able to make it happen this year,’’ Heiford said.