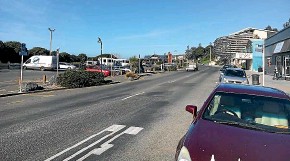 The lease for seven temporary accommodation units at 34 Beach Rd has been extended for two years to February 2025 by the Kaiko¯ ura District Council to support those in need. The units were established to provide temporary accommodation following the 2016 North Canterbury earthquake. The council took over responsibility for the units in 2020, with Te Whare Putea Trust managing the units on the council’s behalf. Community services manager Susi Haberstock said the units were providing housing for local people with nowhere else to go in a time of economic uncertainty due to Covid. Corporate services senior manager Murray Dickson said the units were only ever intended to be temporary. NEW ROAD NAMES After consultation with Te Runanga o Kaiko¯ ura, the council has settled on three new road names for a new subdivision off 69 Inland Rd at a council meeting last week. Ruararangi Lane, Te Ao Wharepapa Drive and Elms Rd have been adopted. Te Ao Wharepapa was the grand-daughter of Marukaita¯ tea, who was the senior Nga¯ ti Kurı¯ chief in the area, while Ruararangi was the original name for Kowhai River. The runanga proposed naming the third road Tuteurutira, but councillors opted for Elms Rd, after the nearby Elms Homestead which was built in 1875. BYLAW ADOPTED Councillors have adopted a new trade-waste bylaw to place controls on the discharge of waste from trade properties to the community wastewater system. The bylaw will come into effect in two stages, with provisions relating to the holding of trade-waste consents coming into effect next month. The remaining provisions will take effect in July next year.