CEO helps out on the factory floor 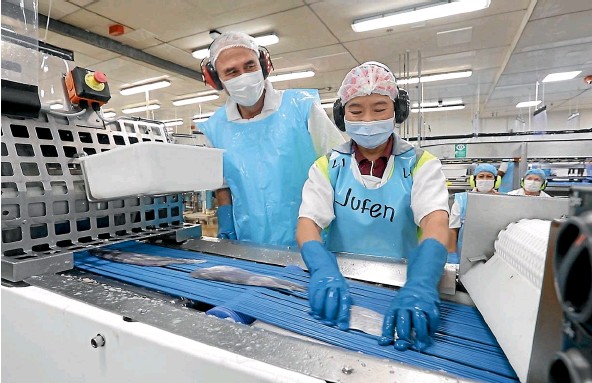 The day after his first shift in the wet fish factory, Sealord CEO Doug Paulin is feeling it. Working on the conveyer belt on Monday, Paulin was reaching and lining fillets up to go into the skinning machines. ‘‘It’s pretty fast and furious,’’ he said. Paulin confessed it was probably ‘‘a little bit harder’’ that what he thought it would be, even though he’s fit. ‘‘You’re doing different movements than what you normally do ... I’m a bit sore actually today, to be fair. ‘‘You get a new respect for the people that do this for 18 weeks during hoki season, because the volumes are very high.’’ As a newbie, he wasn’t quite able to match the pace of the old hands on the shift. ‘‘The lady who was working opposite ... was having a little laugh at times. I got behind a little bit ‘‘It’s one of those jobs that if you do it often you get better and better at it. Her movements were much smaller than my movements.’’ Paulin said it was nice to see the morale of the team working in the factory, alongside 11 office staff who went in after the school shift finished. He did end his shift ‘‘with fish bits all up my arm’’ because he hadn’t donned blue plastic arm guards. ‘‘The lady next door was laughing, and I thought, ‘yeah I should have definitely taken those’. Lesson learnt.’’ Fortunately, though, there was no odour left behind. ‘‘You don’t smell like fish at all, because all the fish is fresh.’’ Paulin said he planned to be ‘‘in and out of the factory right the way through to the end of hoki season’’ around midSeptember.