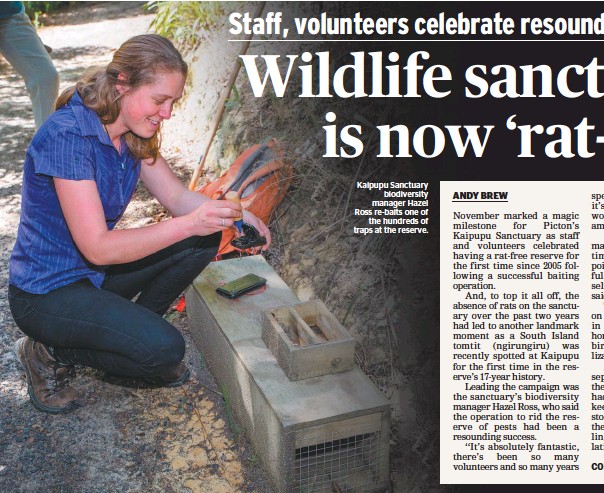 November marked a magic milestone for Picton’s Kaipupu Sanctuary as staff and volunteers celebrated having a rat-free reserve for the first time since 2005 following a successful baiting operation. And, to top it all off, the absence of rats on the sanctuary over the past two years had led to another landmark moment as a South Island tomtit (ngirungiru) was recently spotted at Kaipupu for the first time in the reserve’s 17-year history. Leading the campaign was the sanctuary’s biodiversity manager Hazel Ross, who said the operation to rid the reserve of pests had been a resounding success. ‘‘It’s absolutely fantastic, there’s been so many volunteers and so many years spent working towards this, it’s incredible that all of that work has now achieved this amazing result. ‘‘The two-year (rat-free) mark is an accepted period of time in which to say the poison operation was successful, and we can declare ourselves predator free,’’ Ross said. The sanctuary, which lies on a peninsula and is covered in 40 hectares of bush, was home to a vast array of native birds, invertebrates and lizards, plants and trees. A predator-proof fence separated the reserve from the mainland, and the barrier had proved successful in keeping out pests such as stoats, cats and possums over the years, but Ross said tackling the resident rat population had proved somewhat