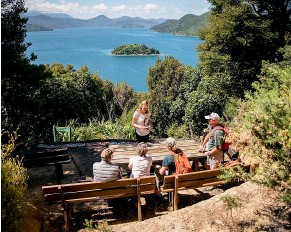 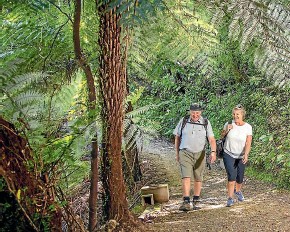 more difficult. That seemed to be the case until 2020 when Kaipupu’s staff decided to deploy the rat bait diphacinone in hundreds of bait stations across the sanctuary. Rat populations in New Zealand could have a devastating effect on native flora and fauna, predating on eggs and chicks and lizards. They also fed on seeds and berries which impeded forest regeneration. Ross said the new poisoning strategy had worked wonders and the removal of the rats and other predators from the reserve had been hugely beneficial for the sanctuary’s entire ecosystem. So much so that they could now start thinking about reintroducing vulnerable, native species to the area. ‘‘Now that we’ve had two years completely rat-free, it’s allowing us to look at bringing species back and on a really exciting note, we’ve just discovered a tomtit has brought itself back on to Kaipupu from surrounding bush up on the Burns Valley hills. ‘‘I don’t think there’s been a tomtit recorded there since [the sanctuary] started, it’s actually introducing itself. ‘‘We are already seeing birdlife begin to flourish and can [now] start to plan for translocations of rarer species such as robin and Marlborough gecko,’’ she said. Translocation involved the managed movement of live indigenous plants or animals from one location to another to help with their breeding and survival. Ross said the team would remain vigilant for rats trying to swim across to the sanctuary from the mainland. ‘‘If rats swim to the sanctuary and breed without detection, it green won’t take long for numbers to build up again, so we must be vigilant at monitoring and removing incursions as soon as they occur. ‘‘So we do surveys four times a year to pick up any rats that might have swum through, and we have rat traps spread every 50m in a grid right across the whole 40 hectares, so those are very, very effective for picking rats up and then our monitoring makes sure we haven’t had any that were breeding in the meantime. ‘‘Two years of monitoring with zero rats living in the population shows that all the rats that arrive here get picked before they can start breeding which is amazing,’’ she said. ‘‘What’s absolutely incredible is that without the rats being around, the invertebrate populations have grown. There’s a species called the Wellington tree weta, and you’d normally see the odd one or two in a weta box, but we opened one the other day, and it had 18 weta living in one small box all on top of each other. ‘‘The numbers of weta are really, really huge because there are no rats to predate them, so they’ve bounced back almost better than anything else so far.’’