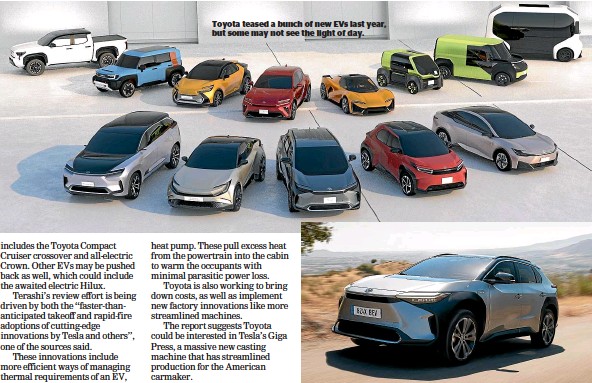 Toyota is reportedly considering switching up its electric vehicles plans in response to the booming EV market. According to Reuters, Toyota’s planning had previously assumed demand for EVs would ‘‘not take off for several decades’’, four internal sources, who declined to be named, said. In reality, automakers are forecasting EVs to represent more than half of total vehicle production by 2030. When Toyota designed the e-TNGA electric platform, which the forthcoming bZ4x rides on, Reuters’ sources say it was working on the assumption that it would need to sell about 3.5 million EVs per year – roughly one-third of its current global volume – by 2030 to stay competitive. A working group, led by Shigeki Terashi, former chief competitive officer at Toyota, has been charged with outlining plans due early next year for improvements to the current e-TNGA electric platform or recommend a new architecture. The proposals, currently under review by Toyota’s management, would rewrite the $66 billion EV rollout plan announced last year. In the meantime, Toyota has paused work on some of the 30 new electric projects it announced in December, which Reuters says includes the Toyota Compact Cruiser crossover and all-electric Crown. Other EVs may be pushed back as well, which could include the awaited electric Hilux. Terashi’s review effort is being driven by both the ‘‘faster-thananticipated takeoff and rapid-fire adoptions of cutting-edge innovations by Tesla and others’’, one of the sources said. These innovations include more efficient ways of managing thermal requirements of an EV, like combining airconditioning with the temperature control for the powertrain in the form of a heat pump. These pull excess heat from the powertrain into the cabin to warm the occupants with minimal parasitic power loss. Toyota is also working to bring down costs, as well as implement new factory innovations like more streamlined machines. The report suggests Toyota could be interested in Tesla’s Giga Press, a massive new casting machine that has streamlined production for the American carmaker. We should learn more about Toyota’s reworked EV plans by next year, if they come to fruition.