The hottest places to cook your own meal 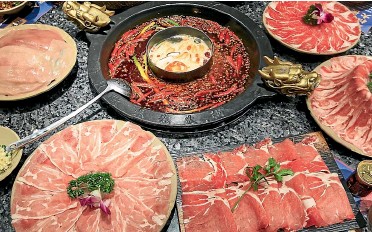 Take a large pot of simmering stock, plop in the ingredients of your choice and let them bubble away until cooked. Hot pot might sound similar to the way you prepare food at home each night, but this dining style brings age-old tradition, participation, and a lesson in time management to meal time. THE DISH The Swiss have fondue; the Chinese have hot pot. Also known as steamboat, the communal dining method has been thousands of years in the making, with links to China’s imperial Han Dynasty when three-legged bronze ding (or cauldrons) were used as cooking vessels. It is also believed that Mongolian nomads used their upturned helmets as personal cooking pots, while the fifth Emperor of the Qing Dynasty was so obsessed by the meal that he ate 200 kinds of hot pot in one year alone. Today, hot pot restaurants transform dining tables into personal cooking stations. Individual or large partitioned cooking pots serve as the centrepiece in which flavourful broth made with water and all manner of spices (sometimes up to 67) is brought to a boil and left simmering for the duration of the meal. Diners use chopsticks to dunk in and cook raw ingredients, from thinly sliced meats to varieties of mushrooms and fungus, pre-sliced Chinese vegetables, udon noodles, dumplings, bean curd, and condensed balls of seafood. This is when an elementary knowledge of cooking comes in handy to manage boiling times and remove each piece from the stock once heated through and good enough for consumption. The items are then fished out of the stock and dipped into ramekins filled with delicious condiments such as hoisin and soy sauces, finely chopped garlic, and chilli oil. In a group, the meal can become an exercise in who owns what slice of boiling produce. Vegetarians can be supplied with their own plant-based broth to not taint their meal in meaty water. TRY IT OVERSEAS There are as many styles of hot pot as there are potential ingredients. Chongqing hot pot is known for its mouth-numbing Sichuan stock, while northern styles focus more on meat. Japan has its own version known as shabu shabu, while there are two Korean styles, jeongol and budae jjigae, which both use broth on the spicier side. Switzerland’s take is called fondue chinoise, where the cheese sauce is swapped out for rich meat bouillon. Pre-pandemic, I visited the popular hot pot restaurant Shun Fu Fei Niu, outside the city walls of ancient Xi’an, China, where every diner is entrusted with their own gas burner and individual mini cauldron. It offers melt-in-your-mouth sliced pork belly and, for the thickskinned, the region’s infamous snake wine made with ingredients such as duck penis. During a more recent adventure, I encountered the Mongolian style at The Q Restaurant in Boston, in the United States, where cooking pots can be partitioned to hold several kinds of flavoured broths. There, diners can cook the likes of New Zealand lamb shoulder, rib eye, tripe and lobster in soup bases such as ginseng herbal chicken, spicy beef tallow and Japanese tonkotsu. TRY IT HERE Da Long Yi has more than 400 hot pot restaurants around the world, including one in Auckland’s inner-city Grafton. The chain is known for its authentic Sichuan-flavoured hotpot. Mt Eden’s Hotpot Duke is another crowd favourite. Red Hill is Wellington’s most popular hot pot restaurant. It offers soup bases such as mushroom, chicken and hot and spicy across two-hour sittings. Book the late session and witness how the venue makes the transition into a karaoke bar. ❚ The writer was hosted in Xi’an and Boston.