Players go into bat for Paine

The player-led push for Tim Paine to retain his test spot has gathered further momentum, with Nathan Lyon declaring Australia want the ‘‘best keeper in the world’’ at the Gabba. Paine has stood down as men’s test skipper because of a sexting scandal. The veteran, who turns 37 when the Ashes begin on December 8, returned from neck surgery during a second XI game this week. Paine is set to play a one-dayer for Tasmania today before linking with the test squad for an intra-squad match in Brisbane. Shane Warne has argued the gloveman’s time is up and selectors should hand a baggy green to Josh Inglis, while fellow legend and Paine’s long-time personal mentor Ricky Ponting has cautioned the saga will prove a distraction for the side. But players in the current squad have offered strong public and private support of Paine, meaning coach Justin Langer would risk stirring further unease if he were to go against the grain. There is no indication Langer and fellow selectors are considering such a move. Far from it; Paine noted Langer wanted him to continue as skipper for the five-test series against England. ‘‘The selectors said they were going to pick the best available XI. In my eyes, Tim Paine is the best keeper in the world,’’ Lyon said. ‘‘This is very selfish – from a bowler’s point of view – I want the best gloveman behind the stumps. ‘‘It’s music to my ears [when the ball lands in Paine’s gloves]. ‘‘Every bowler’s relationship with the keeper is exceptional. Tim Paine is a very lovable guy and very well respected. ‘‘I’m pretty sure I’m speaking on behalf of every bowler that we want the best keeper. ‘‘He’s got my full support and I 100 per cent guarantee he’s got the full support of the Australian change room.’’ Lyon, who has formed a key partnership with Paine since the 2017-18 Ashes in Australia, rejected Ponting’s claim. ‘‘We’re professional athletes, we know what we have to do and how we’ve got to go about it,’’ the offspinner said. ‘‘Tim made a mistake a few years ago. He showed a lot of courage and he’s owned that mistake.’’ Lyon’s words come a day after Marnus Labuschagne and Marcus Harris indicated Paine, appointed captain in the aftermath of the 2018 Cape Town cheating scandal, would be welcomed back with open arms. Paine, who hasn’t played a test since January nor represented his state’s first XI since the start of April, was initially expected to miss today’s clash at Bellerive Oval. The call-up to a 12-man squad means the Tasmanian is set to play five consecutive days of cricket this week and likely have another chance to bat after scoring one in a low-key return at Lindisfarne. 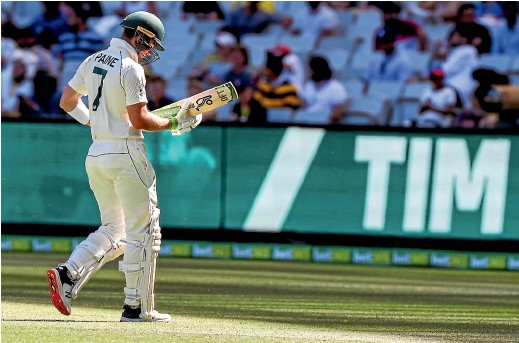