Wellington Phoenix are refusing to give up hope of staging A-league football games in New Zealand this season. Looming changes at the border will allow fully vaccinated New Zealanders to skip quarantine and self isolate at home for seven days from January 17. But that does little to help the Phoenix, whose men’s and women’s teams play in transtasman competitions and face the prospect of spending the entire season in Australia. New Zealand will only begin to reopen to all fully vaccinated visitors from April 30. Other major trans-tasman sporting competitions affected by the ongoing border restrictions include Super Rugby Pacific, the Australian NBL and the NRL. The Phoenix men had been looking at hosting up to nine matches in New Zealand from January 29 while the Phoenix women were aiming to play two to three games as doubleheaders with the men. General manager David Dome said the Government’s announcement was bittersweet as far as the Phoenix were concerned as the changes presented some obvious challenges for travelling teams. ‘‘There are two barriers to it at the moment. The first is we can’t get Australians in yet, and on the face of it that’s not until May 1, and the second is the seven day [self isolation requirement],’’ Dome said. ‘‘If you have to do seven days it’s not going to work because you can’t do that in a trans-tasman competition like ours or Super Rugby, NRL or ANBL.’’ Dome said the Phoenix’s hopes of playing games in New Zealand would rest on securing an exemption from the Government. He had already written to Sport New Zealand to explain their predicament and to offer up some possible solutions. ‘‘That’s the only way we’re going to be able to have transtasman sporting competitions resume before May 1. ‘‘Talking to Sport New Zealand, there’s certainly a willingness to look at it and ask ‘how is this going to work?’ because it’s not one code, it’s effectively all the major codes in New Zealand that have been affected.’’ Coach Gemma Lewis had gone into the team’s inaugural A-league Women season expecting to play every game in Australia due to the border restrictions, but she said any games back home would be a bonus. Although they would still need an exemption to play in New Zealand, Lewis believed the border changes were a step in the right direction. ‘‘Obviously there’s still a lot to work through from the Wellington Phoenix end to make it happen, and with APL, but the MIQ has only made things more promising for us,’’ Lewis said. ‘‘With things being slightly more relaxed, if we worked with the Government on us getting over there, there’s potential we could have those opportunities as long as we test negative and everything that comes along with it.’’ The Phoenix men staged two games in New Zealand last season; one in Wellington and one in Auckland. 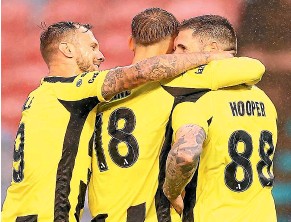 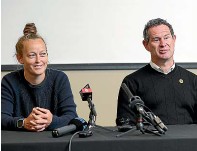