Finn Allen had a whirlwind summer a year ago, taking the Twenty20 Super Smash by storm and blazing his way into the Black Caps. After a winter where he’s rubbed shoulders with a number of short-format greats, he’s back to do it all again with the Wellington Firebirds. His record last season still makes for remarkable reading – 512 runs, including six 50s, at an average of 56.88 and a strike rate of 193.93, as the Firebirds emerged triumphant for the second year in a row. Their quest for a three-peat begins at Hagley Oval tonight, with a rematch of last year’s decider against the Canterbury Kings, which follows a repeat of the women’s final between the defending champion Canterbury Magicians and Wellington Blaze. While Allen started last season as somewhat of an unknown, opposing teams are sure to have detailed plans to try to tie him down this time around. But he’s ready to show what he’s learned from his time with Royal Challengers Bangalore in the Indian Premier League, Lancashire in England’s T20 Blast, and Birmingham Phoenix in The Hundred – experiences he wouldn’t have been expecting to have last November. ‘‘I’m looking forward to the challenge,’’ Allen said this week. ‘‘I suppose that’s what I’ve been working on a lot in this last sort of eight-month period, just trying to evolve my game even more and to be harder to bowl at and to be able to hit to different parts of the ground. ‘‘Last year went well, but I felt like I was a bit limited in the areas that I could score, particularly through the off-side, so I’ve put a lot of time into developing that and working towards being a lot harder to bowl at.’’ Former Black Caps coach Mike Hesson picked Allen up as an injury replacement for Bangalore before he’d made his international debut and while he didn’t play during his time with the team in India in April and May, he relished the chance to train with batsmen such as Virat Kohli, Glenn Maxwell, and AB de Villiers. Then came England, where he did play and his teammates included Jos Buttler and Liam Livingstone. ‘‘In India, it was obviously awesome to mix with AB, Maxwell, Virat and all them, especially now that AB’s retired, it’s pretty cool to say that I got to sort of be around him for a small part of his career,’’ Allen said. ‘‘Then in the UK it was just about trying to learn new things from Jos and Livvy. It was cool in India learning to play spin in spin conditions and to sort of learn how guys like Maxi go about it.’’ Allen was even gifted a couple of Kohli’s bats – something that caused a stir when he used one with the Indian star’s name on it in a photo shoot with the Phoenix. ‘‘That’s just the kind of guy he is,’’ Allen said. ‘‘He’s someone that always helps people and is always thinking of others, so yeah, it was pretty cool to get that from him.’’ The Phoenix made it to the final of the Hundred on the back of strong form from their Kiwi import, who missed the decider as he had to head to Bangladesh to continue his fledgling international career, which started against the same team at the end of the home summer. Allen made a golden duck on debut, but smashed 71 off 29 balls in a win at Eden Park to put an exclamation mark on his breakout summer. His time in Bangladesh didn’t start well, as he caught Covid-19 and missed the first two matches, but an innings of 41 off 24 helped the Black Caps end the tour with a consolation win in a 3-2 series defeat. In between, he missed out on a place in the squad for the T20 World Cup. He was only an outside chance to make it, but the fact that he didn’t grew all the more intriguing once coach Gary Stead and captain Kane Williamson decided to turn Daryl Mitchell into a power-hitting opener – a role the all-rounder had never played before, but one he starred in as they made the final and lost to Australia. 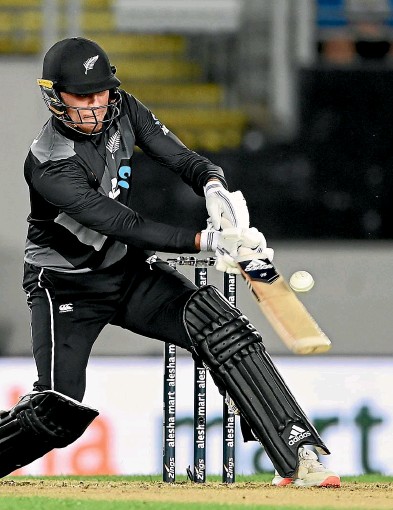