Ioane back from injury and keen to stay at Chiefs 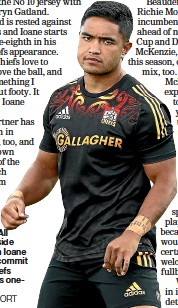 JOSH Ioane might have only four weeks to earn a new contract with the Chiefs after missing their past five matches because of a debilitating rib injury that made daily tasks difficult. The one-test All Black signed on a one-year deal for this season, keen for a fresh start to revitalise his career after it stalled somewhat with the Highlanders. The 26-year-old wants to extend his stay in Hamilton and his comeback kicks off today against the Rebels in Melbourne – a timely return for him and the Chiefs, who are secure of a playoff berth but still need wins in the final three regular rounds to confirm a top-four finish and a home quarterfinal in June. The Otago playmaker appears settled in Clayton McMillan’s Chiefs and said he would like to commit to the Waikato-based franchise beyond this season. ‘‘I’ve enjoyed it. I’ve got a lot of family here in Hamilton,’’ Ioane said. ‘‘It’s been a different experience in a new environment. Meeting new people has been awesome and learning about the Chiefs’ identity.’’ The emotive attraction of representing Moana Pasifika, who he played for in their first match in a one-off fixture against the Ma¯ ori All Blacks in 2020, might tempt the former Auckland schoolboy one day. (Ioane, who has been selected for the Ma¯ ori All Blacks, also played for Samoa’s under-20s in 2015.) But for now he’s not going anywhere and is keen to establish his place at the Chiefs in the battle for the No 10 jersey with in-form Bryn Gatland. Gatland is rested against the Rebels and Ioane starts at first five-eighth in his sixth Chiefs appearance. ‘‘The Chiefs love to attack, move the ball, and that is something I enjoy about footy. It suits me,’’ Ioane said. His partner has joined him in Hamilton, too, and he has shown glimpses of the form which earned him his All Blacks call-up in 2019 – well, until he was smashed in a heavy tackle from Jordie Barrett when the Chiefs pipped the Hurricanes 30-29 in Wellington on April 3. He sustained an irritating rib injury – but not a break – that was particularly painful for two weeks. It was a sore one. Ioane said it was difficult to sleep, lie on the couch, or get up. ‘‘I couldn’t [go to the] gym, couldn’t run, couldn’t laugh, couldn’t cough,’’ he said. ‘‘Five or six weeks on, it’s healed up.’’ How the Chiefs use Ioane in the final weeks of the season and beyond is interesting. Gatland has started eight of their 11 matches at first-five this campaign and Ioane did in the other three. Kaleb Trask started at fullback in last Saturday’s 38-28 home defeat to the Brumbies. Ioane has long indicated his preference to play No 10, but he is also adept at fullback and might combine in a dual playmaking role with Gatland. His one test, a 92-7 rout of Tonga in a World Cup warm-up match in Hamilton, was nearly three years ago, and, at this point, a comeback in black seems like a long shot because of the rise of Blues playmaker Stephen Perofeta. Beauden Barrett and Richie Mo’unga are the incumbent first-fives ahead of next year’s World Cup and Damian McKenzie, who is in Japan this season, ought to be in the mix, too. McKenzie is expected to return to the Chiefs next year and crack the World Cup squad after he missed out in 2019 because of a serious knee injury. That would intensify the competition for spots among their playmaking options because McKenzie would almost certainly be welcomed back at fullback or first-five. Where Ioane fits in is yet to be determined.