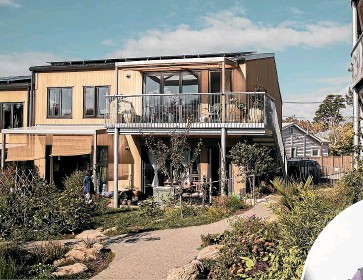 Ma¯ ori and Pacific needs are being left out of high-density developments as the intensification of Auckland accelerates, an architecture expert says. Architectural firm DesignTRIBE director Rau Hoskins (Nga¯puhi) said current intensification designs were failing. ‘‘My real concern is that this medium-density juggernaut, which is powering through Ma¯ ngere and Mount Roskill, is a cookie-cutter, one-size-fits-all approach, which does not respond to Ma¯ori and Pacific wha¯nau dynamics,’’ Hoskins said. The past 12 months have been the busiest on record for new home consents, with the latest Stats NZ figures showing 50,858 new homes were green-lit, including more than 21,470 in Auckland alone, driven largely by increasing multiunit dwellings. Hoskins said it was important to acknowledge that Ma¯ori and Pacific wha¯ nau dynamics were not the same as ‘‘nuclear-Pa¯keha¯wha¯ nau dynamics’’, he said. ‘‘So we’re getting designs which are made for [Pa¯ keha¯ ] groups and there’s just an assumption that Ma¯ ori and Pacific wha¯ nau will just have to appreciate them or at least make do. We do have to densify to some degree, but we have to be much more intentional with how we look at the designs of those communities and focus on multigenerational environments and with much better integration of outdoor spatial arrangements.’’ A major concern for Hoskins was that many new terraced houses had all living spaces on the ground floor and bedrooms on the second and the third storeys. The Government had ‘‘really pushed play on housing volume’’ and now was the time to look closely at the quality of designs and the broader environments they were being created in, he said. ‘‘There’s some quite poor developments and then some reasonable ones, but there are very few good environments which you can point to and say this really responds to Ma¯ori and Pacific wha¯nau realities.’’ Urban Auckland monitors and comments on the quality of urban and architectural design in the central city. Its chair Christian van Bohemen said cookie-cutter developments sprouting up in areas like Hobsonville Point were being driven by economics and attempts to ‘‘squeeze more out of their sites’’. ‘‘The big, important thing with high-density housing is that of the provision of public amenity and commons on a site,’’ van Bohemen said. Some of the worst examples had ‘‘less than a pocket-handkerchief’’ of a courtyard surrounded by a twometre fence and looked ‘‘a little-bit like chicken coops’’, she said. ‘‘That’s not great. But you could also say it’s providing housing and then the qualifier to that is, ideally, that should be located in places where people can then walk to or bike to local centres and work.’’ Van Bohemen pointed to developer Ockham Residential and Cohaus, a co-operatively owned 22-unit building in Grey Lynn, as high-density done right. The debate around design is entwined with arguments from those who want to preserve large swaths of older residential homes in innercity suburbs and those who want to see the areas highly developed. Auckland Council is looking to rezone 5000 protected buildings under Special Character Areas (SCA) for intensification as part of changes to the Auckland Unitary Plan. It’s in response to the Government’s new housing rules under the National Policy Statement on Urban Development (NPS-UD) and the Medium Density Residential Standards (MDRS). The NPS-UD requires councils to allow for at least up to six-storey buildings within walkable distances of the city centre, metropolitan centres and rapid transit stops. The MDRS allows for up to three homes of up to three storeys on most residential sites. Housing heritage in Auckland was distinctly colonial, with wooden villas – which took its lead from English Victorian architecture – being one of the most distinctive housing types and the predominant design built from the 1870s through to World War I. Many were mass-produced and became the favoured design in the first suburbs of colonial towns and villages in the 1880s as urban populations dramatically increased – with over 85,000 being built nationwide. Birkenhead Heritage Society spokesperson Erica Hannam said many in her community were feeling ‘‘blindsided’’ by what they felt was a ‘‘significant loss of heritage’’. ‘‘Loss of such homes will lose links to our past – we need to identify and preserve the places and stories that belong with them here.’’ An Auckland Council spokesperson said SCAs made up around 3.5% of Auckland’s residential land. However, four suburbs had almost all of their residential buildings covered by SCAs. Cheltenham and Devonport on the North Shore were entirely protected, while Grey Lynn Central and Ponsonby East had 94% and 90% protected. ‘‘Maintaining a sense of history and place in some of our most unique Special Character Areas of Northcote Point and Birkenhead Point is what people are asking for,’’ Hannam said. But Hoskins said New Zealand was continuing to cater to colonial ways of living because of ‘‘economics and myopia’’. ‘‘You build in the style that you personally know and are comfortable with. And the people that are creating these designs are not the Ma¯ori or Pacific people that are going to be housed in these environments. ‘‘So people are building in their image.’’