Cheeky ka¯ka¯ make themselves at home in Wellington 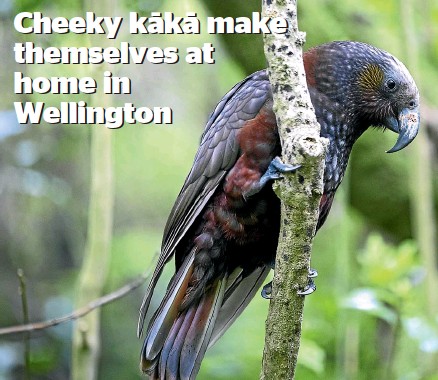 A ka¯ka¯ sitting on her heater when she walked into her house was not quite what Wellington’s Libby Allwood was expecting to see. ‘‘I came into the TV room, and the cat was staring at the wall, which turns out to be a ka¯ka¯,’’ Allwood said. She lives across the road from Zealandia ecosanctuary’s predatorfree fence in Karori with her family. Allwood reckons the bird must’ve climbed through an open window, but it did nothing except to sit on the heater and stare at the cat. The ka¯ka¯ soon flew out after the family opened the doors. It was the first time that a bird had turned up inside their house, said Allwood, but the family ‘‘didn’t mind the ka¯ ka¯ ’’. However, they are not the only Wellingtonians who have received an unannounced visit from the cheeky native parrot. Allan Wright lived in a Kelburn flat last year and ka¯ ka¯ were a regular presence on the deck because the house was close to Zealandia and there was a ko¯whai tree nearby. But fearless feathered fella was feeling adventurous one day last September after examining Wright’s duvet on the deck. ‘‘It walked from the deck into the lounge and started to check out inside the house. They might be expecting some kind of food.’’ It was the first time that a bird wandered into the house, he also said, because they were more attracted to the little plastic toys that the children from upstairs dropped onto the deck. The ka¯ka¯’s exploration didn’t last long – Wright gently shooed the bird away and found the experience ‘‘pretty funny’’. Ka¯ka¯ had been extinct in the Wellington region for more than 100 years, until six captiveraised birds were released in the Zealandia wildlife sanctuary in 2002. Since then, the native parrot has bred and spread across the Wellington region, with bird counts rising by 250 per cent between 2011 and 2021. However, the growing population started to strip bark from non-native trees such as pines, which became a source of nuisance to Wellingtonians and an overhead hazard to bush walkers. Ka¯ka¯ researcher, Dr Rachael Shaw, is a lecturer in behavioural ecology at Te Herenga Waka – Victoria University of Wellington. She had a similar encounter, when one of her friends left the door open at her house and one made it inside the lounge. But there is also a concern about the ka¯ ka¯ ’s boldness, she said, because it could be a result of people feeding birds on their balconies. ‘‘It’s one of the by-problems of feeding,’’ Dr Shaw said. ‘‘They could associate houses with foraging opportunities if people give them food.’’ And they could get used to the easy pickings. ‘‘They might be habituated with human presence and stop perceiving humans and houses as risky environments.’’ She also said increasing ka¯ka¯ presence inside houses could create ‘‘dangerous’’ situations for birds and humans, as pets could attack the birds, while the ka¯ ka¯ ’s sharp beaks could damage property. In case a ka¯ka¯ wandered into your house, Dr Shaw said the first thing was to stay calm and avoid any sudden movements, while talking to them in a normal voice also helps. ‘‘Ka¯ ka¯ are very intelligent birds. If they can find the way in, they can find the way out.’’ Zealandia’s conservation and restoration manager Jo Ledington said people should hold back from feeding ka¯ ka¯ if any were hanging around houses. ‘‘Providing food of any kind means that energy normally used for foraging isn’t used, resulting in ka¯ ka¯ having more energy for getting into mischief. If you want to support ka¯ka¯ and other native species as they disperse from Zealandia, the best thing you can do is plant natives in your garden and trap for pests.’’