Meet the woman waging a war on Supermarkets

Lyn Webster has only stepped into a supermarket twice in the past two years and tells Virginia Fallon that’s two times too many. 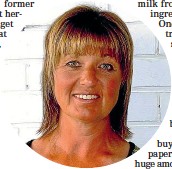 Lyn Webster is struggling to remember her second to last trip to the supermarket. She knows she popped into one a few months ago for rennet, but recalling the visit preceding that one proves difficult. Then, a clue: her mum always gives her a New World voucher for Christmas, and while Webster passed the last one on to a friend she’s sure she spent the one from 2020. ‘‘So there you go, I’ve definitely been at least one other time in the past two years.’’ Webster has been avoiding supermarkets for more than a decade in a move that came first out of necessity, and then out of habit. It started when she realised she’d become indoctrinated into buying up large in the aisles, mainly out of guilt for being a single parent whose children had to pick up the slack while she worked. ‘‘They made their own dinner while I was trying to get a sick cow on its feet, so when they said ‘can we have this or that?’ I said yes.’’ When the global financial crisis hit, the sharemilker took a long hard look at her spending and realised things had to change. Not only was she buying things the family didn’t need, the amount of plastic packaging and wasted food was horrifying. ‘‘I was spending $300 a week, throwing lots out and getting a big fat bum for my trouble. I look back at how we used to live and I’m disgusted in myself.’’ In 2009, the single mother began chronicling her attempts to slash her grocery bill and live a greener life in a newspaper column called Pig Tits and Parsley Sauce. The name came from what her mother used to say when the kids pressed her about what was for dinner: ‘‘It was a way of saying ‘‘I have no idea, go away’’.’’ The self-described former supermarket addict set herself a $100 weekly budget and then, finding that too easy, cut it to $75, nearly tripling her yearly saving goal of $12,000. A book by the same name of her column was published in 2013, though the publishers changed the name to Save. Make. Do. for its reprint. In 2018, she doubled down on her thrifty ways with a $1000 grocery budget for the year, inspired by having stayed away from the supermarkets for 63 days in 2017. ‘‘That forced me to make bread, cheese and butter. Suddenly I realised it was doable and I’ve never looked back.’’ And she didn’t. After sharing her successes and failures with thousands of Facebook followers, she smashed the challenge and just kept going. These days she estimates she spends about $35 a week on things she can’t make, swap or grow, but it’s hardly ever at the supermarket. ‘‘What’s in there that’s good? Meat, milk and veges – you can get that from somewhere else. I buy at Asian grocers and local butchers, places that support the little guy.’’ She makes her own soap, uses milk from her cows and buys ingredients online in bulk. One of her more recent triumphs is flatbread, something that can be made with just a few cheap ingredients. Cleaning products have been replaced with good old baking powder which is also used as shampoo and body wash. And of course she buys things like toilet paper, just online and in a huge amount. ‘‘Supermarkets are a rip-off, that little six-pack is designed so you’ll go back in there and spend $50 while you’re at it.’’ While Webster’s supermarketavoidance has long been established, she’s noticed a sudden upsurge in others doing the same. As New Zealand’s cost of living continues to rise, so do the number of Kiwis desperate for tips to help make ends meet. Her social media page and website are more popular than ever. Despite that, Webster is reluctant to bang on about her own success. She knows she’s been privileged to have cows for milk and country neighbours ‘‘leaving dead ducks hanging off the letterbox’’. But mostly she doesn’t want to sound smug. While she changed her own behaviour during the global financial crisis, she believes the world is in an even worse state now and consumers should have seen it coming. ‘‘If I start going on it’s going to piss people off because they know they should have done it before. It’s easier to do it when you choose to do it, instead of waiting until you have to.’’ Webster isn’t telling anyone else how to live, she’s just hoping to inspire people who, like her, have realised there’s a better way of doing things. ‘‘You don’t go from being a supermarket addict overnight, it’s a gradual process and all in your head. ‘‘We should all get empowered, make stuff and go for it. ‘‘Do anything you can to keep yourself out of that place.’’