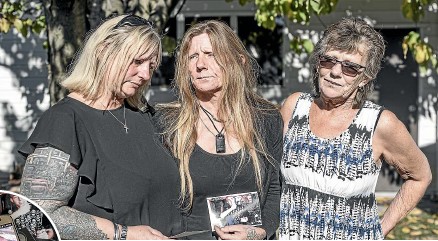 The family of a missing man fear he has been killed and are questioning whether his criminal background is a reason why police have failed to launch a full-scale search. Joel Linwood disappeared after being in a single-vehicle car crash on Old West Coast Rd in rural Canterbury about 3pm on July 18, nearly 10 months ago. He had been on electronically monitored bail at a set address but had cut off his bracelet and was wanted by police at the time of the crash, his family said. Linwood failed to appear in court for a sentencing indication on driving charges five days after his disappearance and a warrant for his arrest remains active. Following the car crash, which had two other people in the vehicle, Linwood, 31 at the time, was seen fleeing across a paddock towards a flooded Waimakariri River and bush. He texted his girlfriend to say he was ‘‘hiding’’. His mother, Sheree Linwood said they had not heard from him since and believed something sinister had happened. ‘‘We know Joel won’t be hiding, he has always been in contact with me ... I do believe he has passed.’’ A police spokesperson confirmed Linwood had not been seen since the crash and investigations into his disappearance continued. Linwood was wanted for arrest at the time and was ‘‘likely concerned about police attendance’’, when running from the crash scene. ‘‘The missing person file remains active.’’ Linwood’s mother said the family searched the crash area. Police also did an initial search in the area but Linwood’s family said the police had since failed to do a fullscale search, despite pleas from the family, and had never highlighted to the public that Linwood was missing, despite putting out press releases about other missing people. Linwood’s aunty, Alana Linwood, said the police had not done enough to locate her nephew. ‘‘Other people have gone missing and they have searched for them, but they have never searched for Sheree’s son. Have they not searched because Joel was a member of a gang? Is the reason because he was a criminal?’’ Linwood had a long list of criminal convictions but ‘‘everyone in New Zealand has the right to be found ... we just want to know where he is.’’ In text messages seen by the Sunday Star-Times police told Sheree Linwood on March 23, more than eight months after her son’s disappearance, that a physical search of the area was still planned, but Covid-19 rules did not allow for the large number of people required. Covid-19 rules changed in mid-April, allowing large gatherings. Linwood’s mother said she had not seen her son in person for about three years prior to his disappearance, but had stayed in contact at least once a fortnight, mostly through phone messages. Their last messages were six days before he disappeared, when he told his mother he was fine and not to worry about him, to which she replied she would always worry until he settled down with a family. She said she did not believe he would have jumped into the flooded river near the crash site, as had been speculated, but she still wanted the area searched so it could be eliminated. And she said her son was a happy and cheeky man who was not suicidal. Also, she didn’t believe his latest brush with the law would see him go into hiding as the criminal charges he faced were not unusual for him. Having spent so long in jail he was ‘‘institutionalised’’, didn’t have a bank account and got his money from home tattooing, ‘‘goodness knows what else’’, and sometimes from his nana and mother, his mum said. Linwood’s nana, Carol Cameron, said she had spoken to her grandson on Skype days before he went missing and had been in shock at seeing his facial tattoos. He had told his nana it was ‘‘all good, nan’’. The oldest of Sheree’s three children, Linwood had been a ‘‘full on’’ child and was diagnosed with ADHD at age six. Raised in Invercargill and Otago, Linwood spent time in Nelson before moving to Christchurch at age 15, and had been in trouble with the law ‘‘ever since’’. In 2013 police described him as a prolific car thief who had been linked to cars taken all over the South Island, and charges read out in the Christchurch District Court included Linwood fleeing the scene of an accident where three people were injured. Other convictions at that time included reckless and dangerous driving charges, burglary, theft and breaches of release conditions. He had spent ‘‘more time in jail than out’’ in the past 16 years, his family said. He was ‘‘lost’’ when on the outside, they said. He had joined the Nomads gang about a year before his disappearance and spent his time between Christchurch and the West Coast, they said. Jennifer Hansen, Linwood’s sister, said she was in weekly contact with her brother prior to July 18, then nothing. ‘‘He has just disappeared. If anyone knows anything please come forward. It’s been a hard nine months and we just want to bring him home.’’