This review was originally published on Kete books (ketebooks. co.nz) and is reproduced here with kind permission. 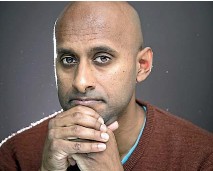 Slow Down, You’re Here by Brannavan Gnanalingam (Lawrence & Gibson, $25) Reviewed by Dionne Christian There is always satisfaction to be had from reading a book that starts off as one thing, but defies expectations to turn into something else altogether. Brannavan Gnanalingam’s compelling seventh novel, Slow Down, You’re Here, is this kind of book. Kavita is stuck in a dead-end marriage to Vishal; they’re the parents of two small children and Kavita is the main breadwinner. The couple’s hopes and dreams have turned into helplessness and despair thanks to a toxic mix of systemic racism, global financial crisis and their own tentativeness. While Vishal has sunk into lassitude, Kavita still has a spark and wants more from life. So, when an old flame unexpectedly offers her a week away on Waiheke, she’s uncertain of whether to accept and, if she does, when – if – she’d come back. Seeking a respite from her present, Kavita looks to the past and how it might create a new future but, as Gnanalingam writes, it’s nostalgia with an edge. A sharp one. All this makes Slow Down, You’re Here sound like a kitchensink drama, where a woman searches for love and a newfound sense of identity, but it is not a fictionalised Eat, Pray, Love (for one thing, Kavita’s strict budget means there’s barely enough money for Waiheke let alone Italy, India and Indonesia). Instead, a horrifying twist early on turns Slow Down, You’re Here into a taut domestic thriller. In just 200 pages, there are uncomfortable questions raised about the necessities of survival, power imbalances and the ways our fate is controlled by forces outside our control. Gnanalingam doesn’t layer on the adjectives. The novel’s clear, almost understated writing is one of its strengths; so is the juxtaposition of two different settings which further ups the questioning, tension and palpable feeling of dread. He originally wrote an early draft of this as a film script and the story has a cinematic quality where you can vividly picture the settings and characters. As a reader, you feel like a voyeur but you can’t look away when you’re increasingly drawn into reflecting on power imbalances – macro and micro – and the nature of relationships where the real desire lies in the idea of – rather than the reality of – a given person or relationship. It’s smart, of and about Aotearoa here and now, and provocative in its politics and personal concerns. Gnanalingam might cover a lot of ground but he does it surely with deft subtly and, at times, uneasy humour. His last three novels have made either the Ockham NZ Book Awards’ long or short list and Sprigs won the 2021 Ngaio Marsh Award for Best Crime Novel. I’ll be disappointed if Slow Down, You’re Here isn’t in the running for next year’s Jann Medlicott Acorn Prize for Fiction at the Ockhams and wholly delighted if Gnanalingam goes home with the award.