We need to talk about Conversations

Even without the shock value of Normal People, the bingeable series’ creators’ return – Conversations With Friends – is more than just a discussion piece. By James Croot. 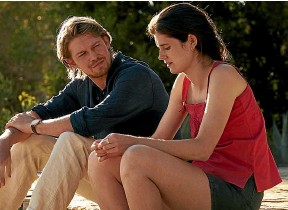 Normal People was one of the shows many sought escape and solace in during lockdown two years ago. A beautifully understated and achingly romantic tale that magnificently and tenderly captured the complexity of teenage friendships, the Sally Rooney-penned adaptation of her own 2018 novel was delivered in 12 bite-size half-hour instalments suitable for either a quick hit, or a luxurious binge. Turning its young leads, Paul Mescal and Daisy Edgar-Jones into overnight stars, it also earned director Lenny Abrahamson plenty of praise for his deployment of hand-held camerawork, natural lighting and intimate close-ups to bring to life the awkwardness and crackling sexual tension of young love. Now Abrahamson and Rooney are back, hoping lightning will strike twice by using the same storytelling methods on the latter’s 2017 debut novel Conversations With Friends. When we first encounter Dublin university student Frances (Alison Oliver), her life is ‘‘rolling out evenly, an adventureless tale’’. We watch as she navigates her exams, has an awkward exchange with her departing room-mate and leads a generally quiet existence, eventually marking the end of the year’s studies with a ‘‘celebration’’ on the couch with her best mate Bobbi (Sasha Lane). But then, we discover their secret. Together they are performance poets, offering up ‘‘sweet, but ruthless’’ rhymes on modern mores, injustices and ills. Frances is the brains, Bobbi the muse, the latter more than happily admits, when they catch the eye of visiting English novelist Melissa Barnes (Jemima Kirke). Impressed by their performance, after a brief chat, she suggests they should continue their conversation sometime, to which a clearly smitten Bobbi responds by putting her digits into Melissa’s phone contacts. It’s not long before the young pair are invited to the seaside for a swim and dinner, joined for the second part by Melissa’s actor husband Nick Conway (Joe Alwyn). While Bobbi and Melissa are happy to gabble endlessly, Nick and Frances’ conversations are more stilted, awkward, him dismissing his latest theatre role in a production of Cat on a Hot Tin Roof as ‘‘not exactly a bold choice’’, while she stumbles her way through a justification of why she prefers the non-impermanence of performance poetry to writing. But, after that evening, Frances can’t stop thinking about him, snatching at an invitation to see him perform and then being delighted to receive a text lamenting that she hadn’t stayed for a drink afterwards. Then comes of the thrill of his request to see her in action and Frances practically bursts out of her skin as they lock eyes. However, it’s at Melissa’s birthday party soon after, that Frances’ attempts to suppress her feelings begin to buckle. Finding him stoned alone in a bedroom, she takes his compliments about her poetry with winsome grace, before he notices her cheeks reddening. ‘‘It’s warm,’’ she stammers, attempting to justify her body’s betrayal of her. ‘‘Try this,’’ he says carefully, pressing his beer bottle against the offending area. Backed by perhaps the little-too-on-the-nose soundtrack choice of Alison Moyet’s Love Intervention, this marks the start of the increasing entanglement of our central quartet, one that drives Conversations with Friends’ tension and narrative. While watching it, it was hard not to be reminded of Fifty Shades of Grey: successful bloke meets tertiary student who also has a job reading manuscripts – but without the glitz, glamour or fetishes – and all the more compelling for it. Now best known as Taylor Swift’s beau, Alwyn (The Favourite) is an understated smouldering presence, while half-Kiwi Lane (American Honey) is a scenestealing whirlwind and newcomer Oliver a perfect mix of self-doubt and quiet daring. This may feel like a less comedic version of Rose Matafeo’s Starstruck or Sophie Hyde’s brilliant feature Animals, with the cynicism and drunkenness dialled down, but, whatever your take and even without the shock value or searing heights of Normal People, Conversations With Friends should certainly spark a discussion or two. Conversations With Friends begins streaming on Amazon Prime Video tomorrow.