A scenic soar around the maunga

From volcanic peaks to busy ports and spectacular views of the national park, a flight over Taranaki is a special experience, writes Pamela Wade. 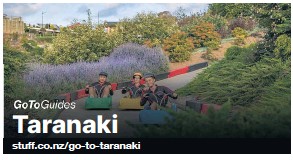 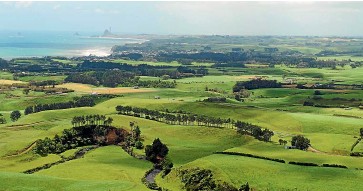 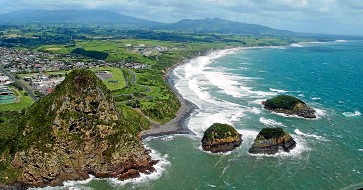 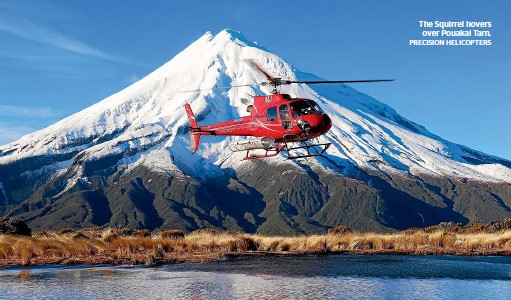 Helicopters are the jet skis of the air. They are noisy, and everyone else scowls at them as they clatter overhead, but riding in one is so much fun that it is no wonder people get addicted. It is also very easy, compared with the sort of flight most of us are used to. Flying into New Plymouth airport, I experienced all the standard airplane fuss and formality, so the contrast when boarding Precision Helicopters’ bright red five-seater Squirrel was marked. After a friendly welcome and a quick safety briefing, we climbed in and belted in, popped on the headphones and were away, lifting up and heading away down the coast. The scenery starts straight away on this Volcano Tour. Heading south, long and dramatically black beaches edged with lines of white surf border green farmland, the Coastal Walkway clearly visible. Then the city sprawl begins, its grid of streets dotted with parks and wound through by Te Henui Stream with its fringe of trees. Busy Port Taranaki comes next, dominated by the pointy peak of Paritutu, while in the blue sea nearby are dotted the rocky, volcanic Sugarloaf Islands. More long black beaches follow, then the chopper turns inland to follow the course of Hangatahua/Stony River. All along the way, pilot Paul commentates, full of history, facts and local knowledge, identifying everything lying beneath our path. And now, straight ahead, is the breathtaking sight of Taranaki Maunga, in all its spectacular symmetry. Star of the surrounding Te Papakura o Taranaki/Egmont National Park, the second-oldest reserve in the country, it rises to 2518 metres from its circle of forest, the dark leaves of the trees contrasting with the neatly cropped bright green of the farmland around it. Dazzling white snow ices its peak and upper slopes, smooth and shiny, emphasising the maunga’s fabulously perfect cone. The helicopter rises too, finally hovering above the summit so we can look down and marvel at this glory of nature beneath us. We all gasp at the sight but feel reassured that the volcano’s last eruption was in 1755 and it is now considered dormant. Then we slowly descend the northern slopes, crossing over the warm golden blotch of the Ahukawakawa swamp. It is a feature on the twoday Pouakai Circuit, and we cross the bush-clad neighbouring range with that name. It is famous on Instagram for its mirror-like tarn, in which the mountain is perfectly reflected. We fly on, along the adjoining Kaitake Range, threaded with walking tracks. Then we are back to farmland, roads and houses and, far too soon, the airport. It’s been a blast. Just like a jet ski, but so much more memorably spectacular. Staying safe: New Zealand is currently under Covid-19 restrictions. Follow the instructions at covid19.govt.nz.