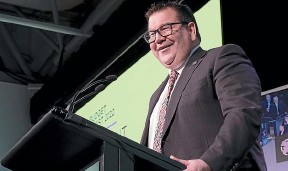 neutral. Given the penalty scheme isn’t making a dent on the cost of taxpayer subsidies flying out the door, fiscal neutrality appears more aspirational than real. There may be a surprise or two in the Budget, but the signalling so far suggests that priorities were decided well before Labour’s political dynamic soured and economic conditions deteriorated. There’s also a political risk that pumping another $6 billion into the economy will not help voters reeling from budget deficits of their own as inflation eats away at their pay packets. Last year’s Budget, described then as the first in a Budget trilogy, was delivered when the Government had full spectrum control and National remained a rabble. That is no longer the case. With the cost-of-living front and centre and Covid no longer the support prop it once was for Labour’s popularity, the Budget’s rhetoric will be interesting to hear. But let’s face it, it’s not an easy time being an incumbent. Our government leaders need only look across the Ditch to see Scott Morrison staring down the barrel of defeat in Australia. Unless he turns the polls around, ScoMo is going to lose to Anthony Albanese, the epitome of a party apparatchik. Further afield, Boris Johnson lurches from disaster to disaster, self-destructing just two-anda-half years after annihilating the ill-fated Jeremy Corbyn. Across the Pacific, Joe Biden’s presidency is proving hugely disappointing, beset as it is by an inability to restore promised civility, pass any meaningful legislation, or get, well, anything done. His Democratic Party faces losing both Houses of Congress, with only the reversal of Roe v Wade by the Supreme Court, if confirmed, likely to get enough Democratic-leaning voters to the polls in the November mid-terms to avert a disaster. One way or another, chaos reigns, and I haven’t even touched on Putin’s folly. It’s a bad time for incumbents and in some respects, we’re seeing the limits of the marketing approach Simon Bridges described and decried in his valedictory. Substance trumps rhetoric, focus groups, and all the other marketing techniques that steer modern governing. We’ll see on Thursday and in the Budget’s aftermath whether Labour’s sequel offers the substance to alleviate the testing economic conditions voters are experiencing.