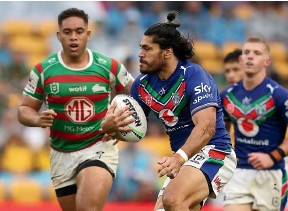 Warriors coach Nathan Brown says he hasn’t liked what he’s seen from the club over the past few weeks. The Warriors may have outplayed the Rabbitohs over the second half in their 32-30 loss yesterday, but Brown would rather concentrate on the opening 40 minutes. The Warriors were as bad as it’s possible to be in the first half at Suncorp Stadium, with their edge defence abysmal and nothing working on attack. It was only a Marcelo Montoya try in the final seconds that saved some blushes as they went into the sheds down 26-6. But over the second half, sparked by some superb play by fullback Reece Walsh, they mounted close to an incredible comeback to be within a longrange field goal of taking the game into extra time. But for Brown, it’s the first 40 that he’s most interested in. ‘‘We can look at it two ways,’’ Brown said. ‘‘We can look at the comeback and nearly getting there. I think we dropped it over the line a couple of times in the second half. ‘‘ [Or] I could focus on the first half and to be honest, as a coach I’ve got to focus more on what happened in the first half, because that’s certainly not where you want to be as a football club. ‘‘We don’t want to be a team that doesn’t start games well, ends up a fair way behind on the scoreboard, then has a great fightback but gets beat. I would be disappointed if that’s what we become. ‘‘We started poor and that’s what we need to be worried about. ‘‘We started the first two or three sets quite well and our middle forwards were front loading their energy and putting a lot into it. ‘‘But then we had a 15-minute block where [Rabbitohs] scoring was just far too easy.’’ This result was the Warriors’ fourth loss in five games and it’s not since their 20-6 win over the Broncos on April 2 that they’ve had a convincing win. ‘‘In the past month I don’t really like what I’ve seen as a footy club, if I’m being honest. ‘‘The first six or seven weeks we showed we’d made some good progress on last year, then we’ve had a few setbacks lately. ‘‘We’ve had a number of personnel changes through injuries, which a lot of clubs have had, and we do end up with some younger blokes out there at times next to each other, which can prove difficult. ‘‘But that first 25 minutes, that product is not where we want to be. ‘‘I thought [hooker] Jazz Tevaga had the best game I’ve seen him play since I’ve been at the club,’’ Brown added. ‘‘Matt Lodge was again outstanding. I haven’t followed is whole career, but I’d be surprised if he’d been consistent as he’s been over the past month. ‘‘Addin (Fonua-Blake) started the game very well tonight, Aaron Pene started the game quite strong, but the juice comes out of them when we get ourselves in that vicious cycle and we leak one or two easy tries. ‘‘Then all of a sudden you’re chasing your tail and it’s disappointing where that part of our game is at the minute.’’ It was a game that highlighted how important momentum is in the NRL.