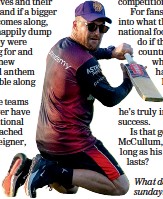 For professional sports people, representing your country is the highest honour (unless you’re Steven Adams), but when it comes to coaching, anywhere will do. We’re often told about how sportsmen and women have pride in the jerseys they wear, but when it comes to playing for a club, what that really comes down to is who’s paying them the most. But playing for your country of birth or heritage, well that’s where money has less relevance. Running out with a fern on your jersey, to represent your family, community and nation is something that makes the 1000s of hours of training worthwhile. But that’s players, not coaches. When it comes to coaching internationally, loyalty doesn’t mean anything. Last week Brendon McCullum was announced as the new test coach for the England cricket team and his first task will be to try to lead them to a series victory over New Zealand. McCullum played 101 tests for New Zealand over a 12-year career, is one of the country’s greatest ever players and captained the Black Caps to many memorable victories. But now he’s the enemy. Next month he will be plotting to bring down Kane Williamson and his team-mates, he’ll want to wipe the floor with the Black Caps, knock his former team out of the top-three in the ICC test rankings and he’ll be getting paid handsomely to do just that. Now this isn’t an attack on McCullum, he’s perfectly entitled to coach England but it’s more a highlight of the double standards there are in sport and that national pride often only exists until you hang up your boots. There have been array of New Zealand rugby coaches who’ve gone up against the All Blacks and John Mitchell has coached the Irish national team as well as the English and American sides, plus the All Blacks. But it goes both ways. The Kiwis are coached by an Australian, Michael Maguire, and his compatriot Steve Rixon is a former coach of the New Zealand cricket team. The New Zealand women’s hockey team was coached by Irishman Graham Shaw until recently. There was a huge outcry when Sven-Go¨ ran Eriksson became the first non-Englishman to coach their national football team in 2001 and when it didn’t work out fans sung ‘‘sack the Swede’’ when down 1-0 to Northern Ireland. If Brandon Smith was to say he wanted to play for the Kangaroos in the future and not the Kiwis, there would be an outcry about it, but if it’s McCullum heading off to coach the English cricket team, there’s nothing said. Coaches are guns for hire. They’ll come in for a few years, then when it goes wrong and they get sacked, they’ll look for somewhere else to go. They don’t coach a team out of pride for a jersey, unless their coaching their own nation, they’re doing it for themselves and their careers and if a bigger nation comes along, they’ll happily dump who they were working for and learn a new national anthem to mumble along to. Some teams will never have their national team coached by a foreigner, like the All Blacks, the Springboks, or the Italian and Brazilian football teams, it’s just not the done thing. In tennis’ Davis and Billie Jean King Cup the nation’s captain (which is essentially the coach) must be from the country he or she is leading. I t’s a simple rule that stops countries hiring big-name coaches from another country and it upholds the purity of the competition. For fans, they can always buy into what the coach of their national football team is trying to do if they’re from the same country and that’s partly why Gareth Southgate has been so popular leading the English football team, because they know he’s truly invested in the nation’s success. Is that going to be the case with McCullum, or will it just be for as long as his four-year contract lasts?