A new review, revealing a culture of medals over athletes, will recommend sportspeople become employees not contractors, reports Zoe¨ George. 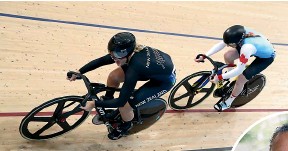 Expecting athletes to chase medals while living off ‘‘slave labour-type salaries’’ is exploitation, says Equal Employment Opportunities commissioner Saunoamaali’i Karanina Sumeo. The independent review into cycling – due to be released tomorrow – is set to reveal a culture of medals over athletes, and will show that athletes experienced a financial shortfall while in the high-performance programme. It will recommend a rewrite of athlete agreements, conditions and funding. The review, established following the death of Olympic cyclist Olivia Podmore, will recommend athletes become employees rather than contractors, which means minimum wage and employment law requirements would need to be met. Athletes have reported living in poverty, including BMX world champion Jessie Smith who said she was told to stop working to focus on her sport. Because of that request and the limited financial support she received from Cycling NZ, Smith on Thursday said she wondered at times where her next meal would come from. She would often miss rent payments and didn’t have enough money to cover the registration or warrant of fitness for her car. She, like others within the cycling high-performance programme, received performance enhancement or development training grants. Athletes on performance enhancement grants earned between $25,000 and $60,000 before tax as of 2019. The amount they received was based off their success in winning medals at key events, including the Olympics, according to a document obtained by Stuff. Development training grants were $12,500 per year before tax. The current minimum wage is about $44,000 annually. Several sources told Stuff some athletes within the programme went unpaid, while having to experience the same training and racing expectations as paid teammates. In December 2021, High Performance Sport New Zealand announced a new funding strategy that would see more than $25 million given directly to athletes. Between 240 and 260 elite athletes across a range of sports are to receive a base training grant of $25,000 a year, while a further 140 to 160 developing athletes will receive $10,000. Some athletes will be able to earn more via ‘‘excellence grants’’, based on performance. Sumeo describes some of the financial support being received by athletes as ‘‘slave labour-type salaries’’. ‘‘It’s called financial exploitation,’’ she says. ‘‘We’re expecting these people to be . . . ambassadors for sport, for our country, and that is how much they are worth? ‘‘This is taxpayers’ funds. I think if the taxpayer saw that payment in comparison to the minimum wage, they would be appalled. And yet, we expect our superstars to perform and represent us. But we’re not treating them at all in a way that is decent.’’ She says being an athlete is a job, and it needs to be treated as such. The current structure is an ‘‘inhumane way to treat our people’’. ‘‘They [athletes] represent us. We wouldn’t want to be known as exploiters of our own people on the international stage,’’ she says. ‘‘Let’s be honest about it, and we need to do better. We need to make sure that we obey our employment laws when we’re engaging and contracting the services of athletes. ‘‘There is a view out there that if you are a sportsperson, it’s a privilege. But we have to recognise it as an employment relationship. We need to see it in that light, because that is what it is.’’ Athletes Federation general manager Roger Mortimer believes that athletes have ‘‘suffered for too long’’. He says it’s because of a direct result of not being given the opportunity to be independently represented in a ‘‘genuine process that mutually agrees the terms and conditions of their working environment directly with the New Zealand sports system’’. ‘‘As has been experienced in many other sports, until this occurs, meaningful change will not be realised.’’ The independent review, spanning more than 100 pages and more than 25 recommendations, and overseen by Mike Heron, QC, and leading academic Sarah Leberman, is set to be released publicly tomorrow. It will address a culture of medals over athletes, favouritism, a disconnect between staff and athletes, the ‘‘concerning’’ use of non-disclosure agreements, the centralised high-performance model, staff hiring practices and a lack of consideration of women’s health. In a joint statement on Friday, Cycling NZ and High Performance NZ said they would comment tomorrow.