My F-bomb horror at the lawn bowls 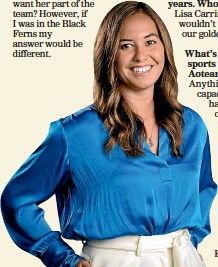 Kirstie Stanway is one of the country’s brightest young broadcasters, working across TV and radio – and, in particular, becoming a regular feature of Sky’s rugby coverage. Despite being a devoted Chiefs fan, she picked the Blues to win Super Rugby Pacific at the start of the season, and she’s justifiably feeling good about that prediction now. Paul Cully quizzes her on a range of Kiwi sporting issues. Your beloved Chiefs just got thrashed by the Brumbies in the Tron. Is it time to forget about 2022 and put on a Blues or Crusaders hat? I love the Chiefs but I’m also realistic. From the start of the season I bullishly picked the Blues to take out the title and they are finally living up to the hype after a rocky start. If they win it, it’s good for rugby right?! In saying that, any of the top four right now could win it. You are Ian Foster. Cortez Ratima versus Folau Fakatava for the third All Blacks’ halfback spot. Who and why? If Folau was eligible it would be him, but both will be All Blacks in the near future. One has been compared to George Gregan and the other Tawera Kerr Barlow, that’s a pretty good 1-2 punch for the future. 2027 in Australia... too soon? You are Wayne Smith. Is it a yeah, or nah, to bringing Sevens stars such as Sarah Hirini and Portia Woodman into the Black Ferns mix for the Rugby World Cup? Absolutely. It’s simple. Do we want to win the World Cup? Well, the best players in their positions need to be selected then. Portia Woodman is the best player in the world, so why would you not want her part of the team? However, if I was in the Black Ferns my answer would be different. Every broadcaster and journalist has cringeworthy moments they’d love to take back. Please outline your worst faux-pas with all the gruesome details. Before Covid there was lawn bowls and it was a happening affair. The year was 2018, and a young Sky reporter got her big break to front the television coverage of the New Zealand Bowls Open at Blockhouse Bay. What could possibly go wrong? It was bowls after all. I spent my days lounging in the sun, waiting for the next batch of homemade treats to arrive on the sideline in between post-match interviews. Growing in confidence as the day went on, I was about to face my biggest challenge yet. The first rule of broadcasting, never hand your mic over. Well, I wish I remembered that under pressure. My mic was hijacked by a rogue competitor and the next thing I know he’s dropped three f-bombs on live TV. If you think it couldn’t get any worse, the bowling club had the PA system hooked up and was proudly playing the commentary and interviews for all to hear. Fair to say that was the most shocking thing ever to happen in the lawn bowling world and I am still scared!! Who is the nicest person in New Zealand sport? Currently playing: Caleb Clarke. Colleague: it’s a straight shoot out between Israel Dagg and Jeff Wilson: extremely talented and kind. Are the Warriors bad or just misunderstood? Terrible, but we love them and I’ll still be watching them this weekend. Let’s gone Warriors! You can be any Kiwi Olympian of the past 20 years. Who would it be? Lisa Carrington: who wouldn’t want to be our golden girl? What’s the best sports venue in Aotearoa? Anything at full capacity! But if I have to pick one, I’ll never forget the first game of Super Rugby at Eden Park after lockdown