How far has Robertson shifted the goalposts on public debt?

The Government has given itself permission to rack up about another $48 billion on top of current debt in normal times, writes Tom Pullar-Strecker. 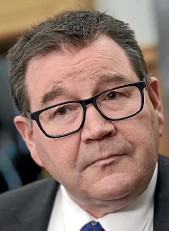 New forecasts will be released in the Budget on Thursday predicting how high the Treasury expects government debt will climb over the next few years. Net core Crown debt stood at $127 billion at the end of March, an amount equivalent to just over 36% of the country’s annual gross domestic product. It is projected to peak at just over 40% of GDP next year. But the new forecasts will show a much smaller headline figure, as the Government is changing the way it presents its debt. It has also switched from setting a target for government debt to setting a ‘‘ceiling’’ for it, but if anyone assumed that was a line that could never be crossed – think again. Why should I care? The Government needs to pay interest on its debt, and the main ways to do that are through taxes or by taking on more debt. Either way, in the long run, the bigger the debt, the more we are all likely to be taxed and the less room there is for additional government spending. Finance Minister Grant Robertson said on Thursday that government debt was set to peak at about half that of Australia’s, about a third that of the United Kingdom’s, and about a fifth that of the United States’, ‘‘based on comparable measures’’. How has government debt been calculated up to now? The main measure has been net core Crown debt. That is the sum of the debts owed by government ministries and departments and the Reserve Bank, minus the financial assets of those entities, but not including those of the NZ Superannuation Fund. It also does not include the assets or liabilities of Crown entities or state-owned enterprises. And the new method? The Treasury will switch to a new main measure that should more than halve the headline number to less than 20% of GDP. The biggest change is that it will count the value of investments made by the NZ Super Fund ($57b) as an asset. It will also count the value of advances, such as the money owed to the Government in student loans (book value of about $10b). Those changes will make the government debt seem smaller than before. Against that, the new measure will include the debts and financial assets of Crown entities such as Ka¯inga Ora and Waka Kotahi NZ Transport Agency, which will bump the debt back up a bit. Why the change? Robertson says the new measure more closely aligns to the main measure used by the International Monetary Fund, so it will be easier for economists to compare our government debt to that of other countries. Is there an ulterior motive here? Let’s say it’s a happy coincidence that the new measure makes the government debt look smaller, especially at a time when inflation is running high. National Party MP and finance spokesperson Nicola Willis is not crying foul over the switch, although she is uneasy about the separate changes to the fiscal rules. Which are? The Government is setting a ceiling on government debt at 30% of GDP under the new measure, which translates to about 50% under the ‘‘old’’ core Crown debt measure. It has also set a target of running annual budget surpluses of up to 2% of GDP from July 2024. But at least we now have a ceiling above which debt can’t go . . . ? Maybe ‘‘ceiling’’ isn’t quite the right word. Robertson has made clear that government debt could spike ‘‘significantly higher than the ceiling’’ in the event of a ‘‘one in 100 year’’ economic shock. In fact, Treasury documents show that the 50% ceiling has been calculated by working out how much debt it thinks the Government could take on in the event of a large shock while still being confident of making its repayments and getting debt back under the 50% ceiling within 20 years. So is it a ceiling or not? Think of it more like a sunroof in your car. If a meteorite crashed through it, or it got really stuffy in the car – like ‘‘once in 100 years’’ stuffy – you could stick your head through the sunroof, right? Anything else gnarly? Including NZ Super Fund assets in the main debt measure means government debt is less within the Government’s control, as the value of NZ Super’s investment portfolio jumps around as sharemarkets rise and fall. There might be a situation, for example, in which the debt ceiling might be breached because of a big crash of global markets that slashed the value of the fund. Willis said that was the sort of issue she would like to discuss with Treasury officials. Bottom line? There will be a ceiling on debt of 30% under the new measure or 50% under the old, unless something pretty bad happens such as the Alpine fault going. That would give this and future governments room to borrow up to about an additional $48b above the current debt in ‘‘normal times’’ while sticking within the new rules. That’s a limit, not a target, but Robertson said on Thursday the ceiling would give the Government ‘‘room to make infrastructure investments, investments that will enhance our productivity, help us meet the challenge of climate change and are of high quality’’.