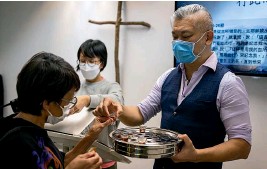 On a drizzly Sunday evening earlier this month, at the Hong Kong government headquarters, a small group gathered under a footbridge around an altar made with portable lights and a folding chair. Father Franco Mella held mass, like he had every Sunday for the past seven years, to pray for the activists and protesters arrested in the city’s widening crackdown on dissent. Moments later, a woman approached the group, took video and recorded the identity numbers of several participants before leaving in a police car. ‘‘We are mentally prepared to be arrested some day,’’ said Winnie Wong, one of the mass organisers. Mella, an Italian priest who at 73 has been advocating for human rights for five decades, is unruffled by the attention. ‘‘If you can accept uncertainty, you won’t fear,’’ he says. Hong Kong’s wide-ranging crackdown on all forms of social protest is now being felt by its churches, a backbone of the city’s once vibrant activism, and its religious spaces are now being brought under state control in much the same way they are in the rest of China. This week, Hong Kong’s national security police arrested 90-year-old Cardinal Joseph Zen, the most outspoken senior Catholic cleric in Hong Kong and the city’s former bishop, for involvement in a humanitarian relief fund that supported jailed activists. After pro-democracy protests began in 2019, Beijing instituted a wide-ranging national security law in 2020 that has crushed dissent on the island territory. Churches have been pushed into censoring themselves and not appointing pastors deemed to have political views, and at least one major church is restructuring itself in case the government freezes its assets. A study by the Hong Kong Church Renewal Movement last year revealed that over a third of churches were now more inclined to adjust the content of their preaching in light of the political situation in the city. During the 2019 pro-democracy protests, Christian pastors led their adherents in sit-ins, prayers and singing, imploring the government to meet the protesters’ demands for accountability and universal suffrage. In the new environment, religious institutions are leaning on their members to censor themselves to avoid trouble with the authorities. As part of Beijing’s efforts to rein in what it saw as increasingly unacceptable behaviour in the city, it appointed in February 2020 a new head of Hong Kong and Macao affairs, Xi Baolong, who gained prominence for his earlier crackdown on illegal churches in Zhejiang, China, by removing their crosses. Five months later, after the new security law was passed, a pro-Beijing state media outlet posted a list of 20 pastors, accusing some of them of being ‘‘riot supporters’’. At least five outspoken pastors left for Britain and Taiwan. In April, a pastor was charged with sedition, for disrupting court proceedings and vilifying the judiciary, after he commented on the ongoing trials on his YouTube channel. The man who may well be central to the integration of Hong Kong’s churches into China’s system is the Rev Peter Koon, an Anglican cleric who is the first member of a religious institution to be elected to Hong Kong’s proBeijing legislature. Pastors have said Koon cleaves closely to Beijing’s model for a clergyman: patriotism before faith. Hong Kong’s clergy members are now rethinking ways of carrying out their preaching to balance between speaking out on social justice issues and the safety of their churches and families. Pastor Shou King-kong, who has been holding sermons with 10 people at a time since January last year, said ‘‘mosquito-sized churches’’, independent from registered church or charity organisations – and the new strictures of the state – would be the norm in the future. ‘‘To continue to speak the truth and call out for social justice, to tell people what the Bible teaches and how the Christ taught us shall be the greatest challenge we endeavour in this era,’’ Shou said.