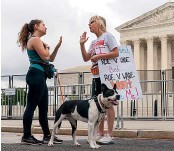 Thousands of protesters were expected to march at rallies in Washington DC and other cities across the US today in a nationwide campaign to demand safe and legal access to abortion. The Bans Off Our Bodies events, organised by several groups, including the Women’s March and Planned Parenthood, are a direct response to the leaked draft of an opinion by the Supreme Court signalling that it is positioned to overturn Roe v Wade, the 49-year-old decision that says the US Constitution guarantees the right to have an abortion. Kelley Robinson, executive director of the Planned Parenthood Action Fund, said her organisation had been hearing an ‘‘outcry’’ from people across the country. ‘‘Folks are feeling anger. Folks are feeling rage. Folks are feeling scared about what this means for them and for their state,’’ Robinson said. ‘‘We always knew that this was our opposition’s plan. They’re just saying the quiet part out loud now.’’ Protesters would gather at more than 380 events across the US, organisers said, to send a resounding message to the nation’s leaders that the majority of Americans support upholding Roe. In the hours after the leaked draft opinion was reported, hundreds of people gathered in front of the Supreme Court building in Washington, expressing shock and dismay that the court might overturn a nearly halfcentury precedent – and the stream of protests has continued. The US Senate failed to advance legislation this week that would write a constitutional right to abortion into federal law, after all 50 Republicans and Democrat Senator Joe Manchin, of West Virginia, opposed moving ahead on the bill. Bridget Todd, a spokesperson for UltraViolet, a gender justice group supporting women and non-binary people, said those protesting today would be demanding the bill’s passage, as well as urging the Biden administration and elected officials in every state to protect abortion access. ‘‘This is an all-hands-on-deck moment,’’ Todd said. ‘‘The writing has been on the wall for so long, and folks with the power to do something really have not done a lot in terms of action.’’ With a 6-3 conservative majority on the Supreme Court, many Americans in favour of abortion rights are fearful that a Roe reversal is imminent, and are worried about the consequences. Republican-led states have already moved to restrict or ban abortion. So far, in about half of states, abortion could be illegal or very difficult to obtain, affecting a majority of women of childbearing age, if Roe was reversed. The first Women’s March nationwide demonstration, after Donald Trump’s 2016 election as president, drew millions of protesters to Washington and to similar marches across the country and is widely considered to be the largest single day of activism in US history. For those who attended, about one-third named reproductive rights as a reason they came out to protest, according to research by Dana R Fisher, a University of Maryland sociology professor who studies protests and social movements. As the Supreme Court’s decision looms, Rachel O’Leary Carmona, executive director of the Women’s March, said today’s protests were among the many actions organisers planned to hold during the northern summer, demanding that the right to an abortion be codified into federal law. A final decision could come any time before the court finishes its work at the end of next month or early July. ‘‘We have to see an end to the attacks on our bodies,’’ Carmona said.