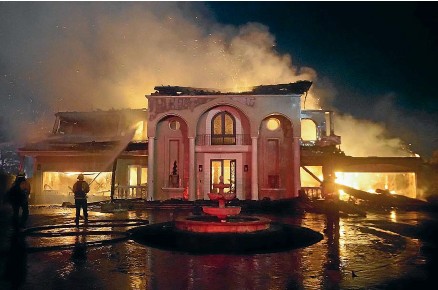 Wildfires are on a furious pace in the western United States early this year – from a California hilltop where mansions with multimillion-dollar Pacific Ocean views were torched, to remote New Mexico mountains charred by a month-old monster blaze. The two places could not be more different, but the elements in common are the same: winddriven flames have torn through vegetation that is extraordinarily dry from years-long drought exacerbated by climate change. As the unstoppable northern New Mexico wildfire chewed through more dense forest this week, firefighters in the California coastal community of Laguna Niguel doused the charred, smouldering remains of 20 large homes that quickly went up in flames and forced a frantic evacuation. ‘‘The sky, everything was orange. It looked like an inferno,’’ Sassan Darian said, as he recounted fleeing with his daughter and father while embers swirled around them. Nationwide, more than 5180km2 have burned so far this year – the most at this point since 2018, according to the National Interagency Fire Centre. Predictions for the rest of the northern spring do not bode well for the western US, with the drought and warmer weather brought on by climate change worsening the wildfire danger. ‘‘We all know it’s really early for our fire season, and we’re all in awe of what we’ve already experienced . . . to this point,’’ said Dave Bales, fire commander for the New Mexico blaze, the largest one currently burning in the US. Even small fires that once would have been easily contained were extreme threats to life and property because of climate change, said Brian Fennessy, chief of California’s Orange County Fire Authority. The perfect example broke out on Thursday, when flames that may have been sparked by electric utility equipment were pushed up a canyon by strong sea breezes and quickly ignited large homes. They burned a relatively small area – about 81ha – but left a large path of destruction. With strong spring winds tossing embers into unburned territory, the wildfire in the southern foothills of the Rocky Mountains of New Mexico has grown tens of square kilometres daily since it started on April 6, when a prescribed burn intended to clear brush and small trees got out of control. That fire merged with another wildfire several weeks later, and the flames have now charred more than 1000km2. The blaze has burned more than 170 homes so far, but authorities say that number is expected to increase significantly.