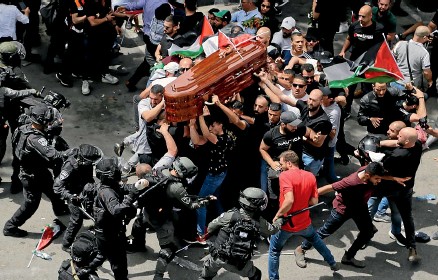 Shireen Abu Akleh was a household name across the Arab world, synonymous with Al Jazeera’s coverage of life for Palestinians under Israeli rule, which is well into its sixth decade with no end in sight. A 25-year veteran of the satellite news channel, she was revered by Palestinians as a local hero – and her death and funeral have resulted in perhaps the largest display of Palestinian nationalism in Jerusalem in a generation. Israeli riot police yesterday pushed and beat pallbearers at Abu Akleh’s funeral in East Jerusalem, causing them to briefly drop the casket in a shocking start to the funeral procession. The scenes of violence have added to the sense of grief and outrage across the Arab world that has followed the death of Abu Akleh, who witnesses say was killed by Israeli troops on Wednesday during a raid in the occupied West Bank. They also illustrate the deep sensitivities over East Jerusalem, which is claimed by both Israel and the Palestinians, and has sparked repeated rounds of violence. Thousands of people, many waving Palestinian flags and chanting ‘‘Palestine! Palestine!’’ attended Abu Akleh’s funeral, believed to be the largest Palestinian funeral in Jerusalem since Faisal Husseini, a Palestinian leader and scion of a prominent family, died in 2001. A large crowd gathered to escort her casket from an East Jerusalem hospital to a Catholic church in the nearby Old City. Abu Akleh’s brother, Tony, said the scenes ‘‘prove that Shireen’s reports and honest words . . . had a powerful impact’’. Al Jazeera correspondent Givara Budeiri said the police crackdown was like killing Abu Akleh again. Police said the crowd was chanting ‘‘nationalist incitement’’, ignored calls to stop and threw stones at them. ‘‘The policemen were forced to act.’’ An Israeli official, speaking on the condition of anonymity, said the details of the funeral had been coordinated with the family ahead of time to ensure it would run smoothly, but that ‘‘masses began gathering around the hearse of Shireen Abu Akleh, and chaos ensued’’, preventing the procession from going along its intended route. Al Jazeera said the police action ‘‘violates all international norms and rights’’. White House press secretary Jen Psaki called the images from the funeral ‘‘deeply disturbing’’. Israeli police later escorted the casket in a black van, ripping Palestinian flags off the vehicle as it made its way to the church, where mourners sang the Palestinian national anthem before Abu Akleh was buried in a cemetery outside the Old City. Abu Akleh was a member of the small Palestinian Christian community in the Holy Land. Christians and Muslims marched together yesterday in a show of unity. Abu Akleh was shot in the head during an Israeli military raid in the West Bank town of Jenin. The circumstances of the shooting remain in dispute. The Palestinians say army fire killed her, while the Israeli military said she was killed during an exchange of fire with Palestinian militants. Israel has called for a joint investigation with the Palestinian Authority, and for it to hand over the bullet for forensic analysis to determine who fired the fatal round. The authority has refused, saying it will conduct its own investigation and send the results to the International Criminal Court, which is already investigating possible Israeli war crimes. Rights groups say Israel rarely follows through on investigations into the killing of Palestinians by its security forces, and hands down lenient punishments on the rare occasions when it does. This case, however, has drawn heavy scrutiny because Abu Akleh was well known and was also a United States citizen. The United Nations Security Council yesterday strongly condemned the killing and called for ‘‘an immediate, thorough, transparent, and fair and impartial investigation’’. Palestinians in and around Jenin have carried out deadly attacks in Israel in recent weeks, and Israel has launched neardaily arrest raids in the area, often igniting gun battles with militants. Israeli troops pushed into Jenin again yesterday.