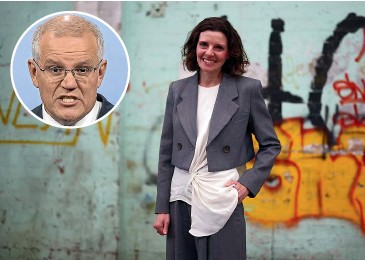 A group of eminent women with close ties to the Liberal Party have turned against Australian Prime Minister Scott Morrison and look likely to play a leading role in scuppering his government in the general election. United by their frustration over Morrison’s lack of action over the climate crisis, the rapidly rising popularity of the female independents has rocked Australia’s conservative establishment – not least because some are the daughters and nieces of former conservative ministers. Worse still for the 80-year-old Liberal Party, polls suggest that the government is in danger of losing its blue-ribbon seats in the wealthier enclaves of Sydney and Melbourne to female independents. They are losses it can ill afford, as Morrison’s coalition holds the barest of majorities in parliament, relying on the votes of crossbenchers. A poll published by The Australian newspaper this week predicted that the opposition Labor Party is on course to win next Saturday’s election with a modest majority of four seats in the 151-seat parliament. Polls indicating a Labor victory were narrowly proved wrong by Morrison at the previous election in 2019, however. Leading the push in Sydney of the ‘‘teal’’ independents – named because of their lighter shade of conservative blue – is Allegra Spender, a Cambridge-educated economist and former consultant. She is steeped in Liberal Party tradition: her grandfather, Sir Percy Spender, was a Liberal cabinet minister, ambassador to Washington, and the architect of Australia’s key security pact with the United States. Her father, a QC, also held high office in the Liberal Party and was a shadow minister. Yet Spender is standing as an independent in the Sydney harbourside seat of Wentworth, a Liberal Party bastion covering the city’s wealthiest areas. It was long held by former prime minister Malcolm Turnbull, and is now occupied by one of the government’s rising stars, Australia’s former ambassador to Israel, Dave Sharma. Spender said it was not her role to protect the party in which her family towered. ‘‘My goal is to make Australia better, not to look after the Liberal Party – and, frankly, the moderates in the party, if they’re not going to be effective and they haven’t been effective, then what’s the use of them?’’ Her comment was a reference to Liberal MPs’ failure to accelerate climate change strategies. However, it is within Melbourne’s privileged inner east that the government faces the greatest ignominy. The 122-yearold electorate of Kooyong has always been held by conservative MPs, but it is forecast to fall to another teal independent woman, Monique Ryan, head of neurology at The Royal Children’s Hospital Melbourne. The loss of Kooyong could put an end to the political career of Australia’s treasurer and heir apparent to the leadership of the party, Josh Frydenberg. Perth is also under siege by a teal independent, Kate Chaney, a member of one of the city’s most prominent families. Her uncle was a Liberal cabinet minister, as was her grandfather. ‘‘The Liberal Party is about power without purpose now,’’ she told The Saturday Paper. ‘‘What they’re good at is the politics. The policies are a whole lot less interesting or important.’’ Across the Northern Beaches area of Sydney, residents are backing another teal woman – Sophie Scamps, an Oxfordeducated doctor poised to take the Liberal seat of Mackellar. The rise of the female independents, partly funded by the wealthy climate change activist Simon Holmes a Court, coincides with Morrison’s deepening unpopularity with female voters. His approval rating was 44 per cent among women at this point in the 2019 election, but has slumped to less than 30 per cent, with about 28 per cent of women supporting his Liberal-National Party coalition government.