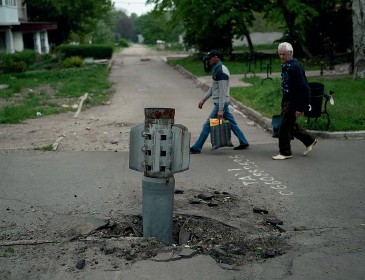 Ukraine’s President Volodymyr Zelenskyy says that although his people are doing everything they can to drive out the Russians, ‘‘no-one today can predict how long this war will last’’. ‘‘This will depend, unfortunately, not only on our people, who are already giving their maximum,’’ he said yesterday in his nightly video address to the nation. ‘‘This will depend on our partners, on European countries, on the entire free world.’’ He said he was thankful to all those working to strengthen the sanctions on Russia and increase military and financial support to Ukraine. ‘‘For Western countries, this is not simply an expense. This is not about accounting – it’s about the future.’’ Zelenskyy said Ukrainian forces yesterday shot down the 200th Russian aircraft of the war, and he noted Russia’s heavy losses in tanks, armoured vehicles, helicopters and drones. He said Ukrainian forces had recaptured towns and villages from Russian troops, and work was under way to restore electricity, running water, telephone communications and social services. Zelenskyy also said Ukraine was engaged in ‘‘very difficult negotiations’’ to try to evacuate the wounded fighters trapped in the Azovstal steelworks in Mariupol. The deputy commander of the Azov Regiment, the last Ukrainian army unit holding out in the ruined port city, said his troops would continue to resist Moscow’s forces ‘‘as long as they can’’, despite shortages of ammunition, food, water and medicine. They have repeatedly refused to surrender, citing fears of being killed or tortured. Ukraine’s prosecutor general said her office was readying 41 war crimes cases against Russian soldiers. ‘‘There is the bombing of civilian infrastructure, the killing of civilians, rape and looting,’’ Iryna Venediktova said. It was not immediately clear how many of the suspects would be tried in absentia. Yesterday saw the first war crime prosecution of a member of the Russian military in Kyiv, as a 21-year-old Russian soldier went on trial for the killing of an unarmed Ukrainian civilian in the early days of the war. ■ Russia suspended electricity supplies to Finland yesterday, after the Nordic nation said it would apply to join Nato ‘‘without delay’’, and as European countries continue to negotiate a deal to end imports of Russian oil and gas. The Finnish electricity network operator said it would make up the shortfall with more imports from Sweden and Norway. Less than 10 per cent of the electricity consumed in Finland came from Russia, it said. Meanwhile, the European Union has agreed to send a further €500 million (NZ$832m) worth of military aid to Ukraine, with Josep Borrell, the EU’s head of foreign affairs, promising more tanks and artillery at a meeting of G7 and Nato foreign ministers in Weissenhaus, Germany.