Is Noeline Taurua our greatest ever coach? 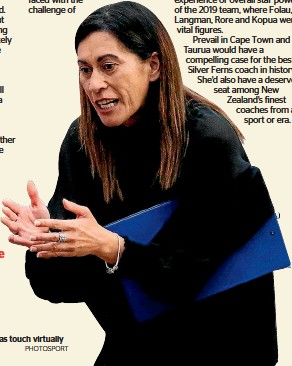 Is Noeline Taurua our greatest ever coach? Back-to-back Netball World Cup titles would solidify Dame Noeline Taurua’s place in the pantheon of New Zealand’s greatest coaches. Taurua would become the first Silver Ferns coach to achieve the feat if she can guide the side to another triumph in Cape Town in August. Given the nightmare situation Taurua inherited when she took over from Janine Southby in August 2018, the Ferns turnaround has been some story. The Silver Ferns were at their lowest ebb in 2018, delivering a horror showing on the Gold Coast where they failed to medal for the first time at the Commonwealth Games. A shock loss to Malawi in pool play saw the Ferns ridiculed and alarm bells sound loudly. Beaten by Jamaica in the bronze medal match, their third straight loss to end the tournament, the Ferns returned empty-handed with morale at an all-time low. At the time, Netball New Zealand badly missed a trick with Taurua, who didn’t even make the shortlist when Wai Taumaunu finished in the role in 2015. Thankfully, they got another chance with Taurua and didn’t screw it up second time around. Taurua had her work cut out for her, taking over a team stung by those results, and immediately realised the rebuild would take time. ‘‘We’re at the bottom of the cliff, but there’s so many good people that’s involved in netball and want us to do well,’’ Taurua told Stuff in 2018. ‘‘In some respect that has made the job easier because I don’t have to sell the dream. Either we stay where we currently are and do the same or are we prepared to make a shift?’’ Stunning the netball world in Liverpool, 11 months after being unveiled as head coach, and leading the Ferns to their first world title since 2003, surprised many. It shouldn’t have. Taurua has had the Midas touch virtually everywhere she’s coached – winning silverware and enjoying considerable success. Enticing Ferns’ legends Laura Langman and Casey Kopua back to the court for the 2019 World Cup was critical in securing the title. Taurua was the only person they would have returned for – working with both players since their formative days with the Waikato-Bay of Plenty Magic and sharing a special bond. Dismayed by the strength and conditioning standards in New Zealand netball, one of the first things she did as national coach was bring in mandatory fitness requirements. They were viewed by some as controversial and weren’t universally popular with the players, but Taurua’s rationale was sound. New Zealand’s elite players are fitter than ever before and it is now accepted as the norm. Taurua revealed late last year strength and conditioning was no longer an issue within the Silver Ferns. Everyone at camps were hitting the 16.3 yoyo test standard – which measures an athlete’s ability to endure repeated periods of vigorous activity followed by short active breaks. The days of not being able to pick players because they couldn’t meet the criteria or send people home from national camps was in the past. After capturing the World Cup in 2019, Taurua was faced with the challenge of replacing more than 400 test caps with legends Langman, Kopua and Maria Folau all stepping away after decorated careers. Another ‘fossil’ – the veteran players’ self-coined nickname – former captain Katrina Rore, played just four further tests after the 2019 World Cup due to pregnancy. Rore announced her retirement in December to focus on her two young children. There were naturally growing pains for the Ferns as less experienced players were asked to step into larger roles internationally. A rare Constellation Cup triumph over Australia in Christchurch in March 2021, New Zealand’s first series win over the Diamonds since 2012, was another fillip for Taurua. Under Taurua’s tutelage, players such as Whitney Souness, Grace Nweke, Sulu Fitzpatrick, Kelly Jury and Phoenix Karaka have all thrived, playing their best netball. This could very well be the last year netball fans see Taurua in charge of the Ferns. She told Stuff in December she won’t make any decision on her coaching future until after the World Cup. Taurua is contracted until November, which will give NNZ sufficient time to appoint a successor if she does decide to step away at the end of 2023. Australia, the Commonwealth Games gold medallists, will head to the World Cup as title favourites, but the Ferns aren’t far behind. On their day in a one-off game, they are more than capable of beating the Diamonds. Another World Cup for Taurua wouldn’t just be a first for a Silver Ferns’ coach, but the crowning glory on her glittering resume. This is a talented Ferns side, but doesn’t boast the vast experience or overall star power of the 2019 team, where Folau, Langman, Rore and Kopua were vital figures. Prevail in Cape Town and Taurua would have a compelling case for the best Silver Ferns coach in history. She’d also have a deserved seat among New Zealand’s finest coaches from any sport or era.