Mildred Armah This is a Public Interest Journalism role funded through NZ On Air. 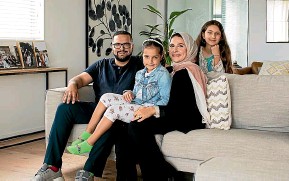 When Auckland-based Iraqi couple Ibtihal Al-Asadi and Yaser Shakib decided to have children, they knew they wanted them to know their Arabic mother tongue. ‘‘We’re both Iraqi, but I grew up in the UK and Yaser in New Zealand. We grew up speaking Arabic with our parents, but English was our first language,’’ AlAsadi says. ‘‘But when we had our daughter, it felt really weird to be speaking to her in English. Language is very important because it carries tradition, and we wanted to teach our child our mother tongue.’’ Al-Asadi says many Iraqis have been displaced in recent decades, and it’s important the couple teach their culture to their children. ‘‘The best way to teach these things to young people is via song and dance, but we struggled to find Arabic nursery rhymes online, specifically in the Iraqi dialect.’’ Al-Asadi says there are multiple dialects of Arabic, and they all differ. ‘‘There are so many different dialects, It’s almost like different languages. When we were looking at the content online, there was just absolutely nothing in our dialect of Arabic.’’ The couple began to translate English nursery rhymes such as Twinkle Twinkle Little Star into their dialect of Arabic, singing the songs to their daughter. ‘‘She started to learn them, which was really nice. Our friends caught on and started singing it to their children as well,’’ she says. Shakib says a friend of the couple suggested they should record and upload the songs. ‘‘We thought we would give it a go despite having no experience of running a business. I come from a civil engineering background, and my wife is a dentist, but this became a passion project. ‘‘We hired a studio here in Auckland after translating the lyrics, and got our nieces to record their voices. We mixed up the tune to bring a more Middle Eastern flavour to it, and a student from Unitec helped with storyboarding and animation.’’ Over six months in 2018, translated nursery rhyme classics such as Daddy Finger, Baby Shark and Heads, Shoulders, Knees and Toes were uploaded to their YouTube channel, Shakoo Maku TV. Almost immediately, the couple began receiving positive feedback from around the world. ‘‘The response was really heartwarming. We were being contacted by second-generation Iraqis who had resettled in different parts of the world, who also wanted to retain their language,’’ Shakib says. ‘‘We thought if our content was resonating with so many, it was a sign we should carry on, and turn it into a real business.’’ He says the channel grew in popularity during the Covid-19 lockdown in 2020, when online screen time increased. ‘‘We wanted to create educational content to reflect what was happening in terms of the pandemic. We started translating hygiene songs, encouraging children to wash their hands, and those videos became widely shared.’’ Shakib says people were posting their videos on social media platforms such as Instagram, ‘‘washing their hands while singing the songs’’. The channel now has over 50,000 subscribers, and over 50 videos averaging one to three million monthly views. Shakib says 57% of their total viewers are living in Iraq. ‘‘The thing we’ve been quite excited about is that our main audience is actually back home in Iraq. It gives us immense pride that these videos are being watched by Iraqi children as well as Iraqis living overseas. ‘‘Parents who want to teach their children Arabic in the Iraqi dialect have told us they’ve found it very useful.’’ He says they’re both ‘‘really proud’’ to have created content embedded in Iraqi culture, which has now spread around the world. The duo now creates original music, working with producers, poets and musicians in Iraq, from their home in Auckland. ‘‘We’re making original content as well as the translated English nursery rhymes,’’ Shakib says. ‘‘We’ve also started remixing traditional Iraqi nursery rhymes that our grandparents sang to us, and making them more current.’’ As for the couple’s children who were the inspiration behind the hit YouTube channel, he says: ‘‘My daughter right now speaks excellent Arabic, and a large part of it was because she always had our content.’’