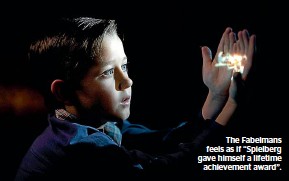 Movies are not sports. With sports, to find out who is ‘‘best’’, we have a competition. And as long as the refereeing isn’t too French, the best come out on top. But with movies, nah. Film festival awards are usually decided by a jury of film-makers – and their decisions are at least interesting. But the Academy Awards is a popularity contest, voted on by thousands of members. Which is why the Oscars rarely throw up a serious surprise. And also why I’ll run down Cambridge Terrace in my undies if Steven Spielberg and The Fabelmans don’t win Best Picture this year. There’s nothing wrong with The Fabelmans. It’s just that I walked out feeling I’d watched Spielberg give himself a lifetime achievement award, just in case no-one else does. And that it wasn’t really a film, more a mausoleum of nostalgia made out of rose-tinted glasses. And that nostalgia is the death of creativity. But that doesn’t mean The Fabelmans doesn’t tick every box a ‘‘great film’’ should. I’d just rather gouge my eyes out with spoons of frozen saccharin than watch it again. Personally, I’d be happy if The Banshees of Inisherin won. It has barely enough plot for a 20-minute short, but the setting, characters, music and cinematography are all fabulous. And writer-director Martin McDonagh’s dialogue is so rhapsodically bonkers I could listen to it all day. At the very least, give Inisherin Oscars for screenplay and cinematography. Colin Farrell as Best Actor and Barry Keoghan as Best Supporting would be appreciated too. But, what if Everything, Everywhere, All At Once crashed the party and won? A nihilistic sci-fi comedy with butt-plugs, hotdog fingers, Jamie Lee Curtis in a fat-suit and a couple of philosophising rocks? The look on Spielberg’s face would be the most meme-able of the year. And McDonagh would surely pee himself laughing at the absurdity of it. In fact, nearly every film that is a possibility this year is a more interesting winner than The Fabelmans. Why not give Best Picture to Top Gun: Maverick? It barely put a foot wrong, made squillions and everyone loved it. And making a successful sequel three decades late is a hell of an achievement. Even if Cruise and co make it look easy. Or what about RRR, that dementedly loveable Tollywood riot that is currently the absolute best film on Netflix? But no, the Oscar won’t go to Top Gun or RRR. And it won’t go to Black Panther: Wakanda Forever, Elvis or Avatar: The Way of Water. It’s difficult to express exactly why, but we all know this is true. The Oscars may be a popularity contest, but only ‘‘serious’’ films need apply. Everything, Everywhere gets a pass by being occasionally incomprehensible – so therefore it must be smart. Or something. Avatar will win its Best Picture Oscar one day. In about a decade, for the fifth and final film. In which the Na’vi will definitely come to Earth and reprogram Skynet to destroy us all. That’s got to happen, right? The truth is, the best film I saw last year was an indie drama called Aftersun. It was startlingly well written and so true to life I walked out feeling I had met a couple of people who, somewhere in the world, must actually exist. But, Aftersun (which is scheduled to be released in select cinemas here on February 23) is barely mentioned in the Oscars chatter. So I’m going to assume it’s just too small and perfect to win. But, if Aftersun did pull off a Coda-sized surprise, it would make 2023 a year I would remember with a smile. And a brisk jog. Nominations for the 95th Academy Awards will be announced in the early hours of Wednesday morning (New Zealand Time). The ceremony itself is scheduled to take place on March 13 (NZ Time).