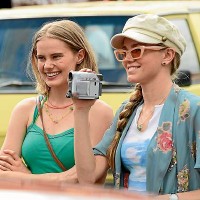 OCTOBER 12, 2002, was one of Indonesia’s darkest days. The evening when the ‘‘gentle island’’ of Bali lost its innocence, as 202 people (mainly tourists from more than 20 countries) were killed when the blasts from two bombs ripped through the packed Kuta bars of Paddy’s Pub and the Sari Club. Two hundred others were injured. Twenty years on and a fourpart Australian series aims to take viewers back to that traumatic event and its aftermath, as authorities from both Indonesia and Australia attempted to work out who was responsible for the deadly attack and bring them to justice. Created by a trio of screenwriters whose eclectic credits range from Wentworth and Catching Milat to the original Heartbreak High and Bananas In Pyjamas, the four-part Bali 2002 takes the noughties portmanteau movie approach (think Crash, Babel and 21 Grams), initially focusing on disparate duos and groups of tourists from both the UK and Oz (as well as a local couple), before bringing them together for that fateful night. There’s honeymooning husband and wife Dan (Paul Michael Ayre) and Polly Miller (Bridgerton’s brilliant Claudia Jessie), revisiting the place that first brought them together. Melbourne-based best-mates Nicole McClean (Elizabeth Cullen) and Natalie Goold (Sophie Forrest) are desperate to make the most of two weeks of drinking, dancing and shopping, while Jason McCartney (Sean Keenan) and his fellow AFL footballers attempt to brush off the remnants of another disappointing season. But while the creators do a good job of bringing to life the colourful sights, sounds – and even evoke the smells – of their setting and make judicious use of archival footage to enhance the atmosphere in the immediate aftermath of the attack, the drama itself feels a little clunky. The ‘‘terrorists’’ are portrayed in the style of a 90s Hollywood action movie (one-dimensionally, virtually always in shadow and underscored by music that screams that they are ne’er-dowells), while each of our ‘‘heroic’’ pairs are left with one in much worse shape than the other. And although Jessie is once again a compelling presence, her character does seem rather underwritten. Likewise, those hoping to see headliners Richard Roxburgh and Rachel Griffiths are left with only a tantalising cameo and disappointment respectively in the opening hour, although the former definitely looks set to play a major role in the episodes to come. Twenty years might not be too soon to relive this catastrophe, but despite an impressive cast, this lacks the quality it truly deserves. Bali 2002 debuts on TVNZ 1 tonight at 8.10pm. Episodes will also be available to stream on TVNZ+.