When the 90s reboot of That ’70s Show was set, Amberleigh Jack was a 14-year-old wannabe rebel whose Walkman and double-cassette boom box played host to her favourite rock bands.

That ’90s Show is streaming on Netflix now. 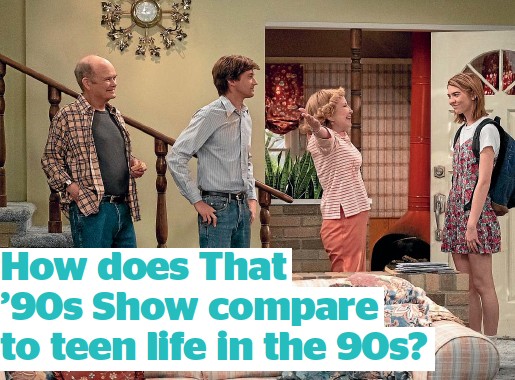 It’s been a minute since canned laughter was a TV norm. But as the latest in a stream of reboots of classic shows, it seems a perfect fit on That ’90s Show. Set with a similar format to the original That ’70s Show – this throwback focuses on a group of teens with different but endearing personalities. Their home base is the basement of Red and Kitty Forman (Kurtwood Smith and Debra Jo Rupp). The get-high-inthe-basement joke remains, but 1970s gags have been replaced with 1990s nostalgia. The focus is Leia (Callie Haverda), the daughter of Eric and Donna Forman (Topher Grace and Laura Prepon), as she spends the summer of 1995 with her grandparents. Cameos are made by all original characters (except for Danny Masterson’s Hyde – given his legal issues). At the time the young, uncool and self-conscious Forman daughter sets about making new friends in Wisconsin, I was a 14-year-old wannabe rebel, whose Walkman and double-cassette boom box played host to The Offspring, Green Day and Pearl Jam. I thought I was cool – in a typically 90s I’m-too-badass-towant-to-be-cool kind of way. We were still mourning grunge legend Kurt Cobain and our weekends were spent watching Dazed and Confused. Titanic and Pulp Fiction were massive and The Crow made us all want to be rebellious goths. We were on the verge of becoming obsessed with Empire Records – and of working in a record store. Photos and posters of our favourite bands (and for some reason, aliens) filled our bedroom walls and black vivid scribblings and edgy song lyrics covered our folders and notebooks. We started having home computers, but being too into them was still uncool. We were a cynical, moody bunch. And although the characters embody a more sitcomfriendly rebellion, That ’90s Show gives a nostalgia-heavy throwback to being a teen in the decade that shaped us. From a Friday visit to the local video store (and renting Clerks for street-cred over actual enjoyment), to excessive use of denim, plaid and slip dresses over T-shirts – the characters may not have quite been us, but they lived TV-friendly bits of lives we knew. From the edgy rock teen, who references the Riot Grrrl Manifesto and sings her rebel heart out to Alanis Morissette’s You Oughta Know in her bedroom, to Friends references, stoned philosophising about Donkey Kong and the leather necklace worn by heartthrob Jay Kelso (Mace Coronel). Music defined everything for us in the 90s, from our cliques to our clothes. It was the heyday of genre-driven fandom – from SoCal punk and Seattle grunge, to RnB, Britpop and the rise of girl and boy bands – and friends’ groups were made through our choices. Given that James Iha (guitarist from the huge 90s band Smashing Pumpkins) composed the music, and the rocked-up theme song was voiced by Brett Anderson of The Donnas – it seemed the creators understood the importance of music here, but they could have taken it much further. Although music isn’t everything for these teens in the way it was for us, Green Day T-shirts do make cameos, and the kids are fluoro-ed up and grab glow sticks to sneak out to a warehouse rave (instantly bringing back memories of my own time getting busted doing the exact same thing). But the references are undeniably 90s. The Rachel haircut makes a minor appearance, as do scrunchies. The arrival of the home computer and that dial-up sound, Friends references, pagers and the convenience of the cordless phone are instant nostalgia hits. As for how the teens spend their time in the on-screen version of the decade that paved my future self? We, too, spent all our free time at friends’ houses. When someone got a car it was a massive boost to our freedom. When we got busted breaking rules, we also lost Nintendo privileges. And the friendships we made were similar – in a less sitcomfriendly way. In a world free of social media and cellphones, we made a home base in friends’ recrooms or malls. We wasted time watching the big movies of the time, got into plenty of trouble and fell in love. We all knew each other’s parents well, because we were always there. Disappointingly, our obsession with disposable cameras and bulky camcorders doesn’t come into play here. My home office is still host to a box of photos and videotapes of our big moments. Most will never see the light of day again, but they hold memories of a time when favourite moments took hours to get to see and spent years pinned to bedroom walls. Those developed pics and poor quality video were a 90s throwback that come second only to Green Day and Nirvana logos etched into our school desks.