Colourful vibe as sun goes down on sevens

The unbeaten New Zealand teams breezed into the quarterfinals with three wins and are poised to finish the final Hamilton Sevens with a flourish, writes 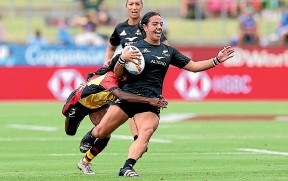 New Zealand’s sevens teams marched into finals day unbeaten and poised to finish with a flourish for the swansong of the Hamilton Sevens. The All Blacks Sevens and Black Ferns Sevens are this weekend playing their last World Series tournament at home for the foreseeable future and finished day one with respective wins over Great Britain. World Rugby has cut New Zealand as hosts from next season, a decision which has rattled New Zealand Rugby and the country’s sevens players who are losing a rare opportunity to play on home soil. Still, the show must go on and both New Zealand teams will be confident of lifting the trophy in Hamilton, as each did in their last home tournament in 2020. More than 17,000 attended yesterday’s opening day at FMG Stadium Waikato, with many in Fijian colours creating a marvellous atmosphere while watching their sides reach today’s quarterfinals with the Kiwis. Day one’s second round of pool matches, when the All Blacks sevens pipped Australia and the Black Ferns sevens overcame a stern Fiji test, were the high point for each team in contests which felt like knockout fixtures. Those are to come in this morning’s quarterfinals – the Black Ferns sevens face Japan at 10:36am and the All Blacks sevens play Ireland at 12:04pm. Stacey Fluhler and Michaela Blyde were in superb form for the Black Ferns sevens, who didn’t concede a point while scoring 105 of their own yesterday. Blyde was excellent in attack but also made a wonderful trysaving tackle against Fiji, as did Jazmin Felix-Hotham when Great Britain looked certain to score. Fittingly, Fluhler brought up their century of points with another try and Portia WoodmanWickliffe had the final say in their 20-0 success. Conditions were sweltering in the afternoon but cooled for the evening’s matches when both New Zealand teams were safely through to the last eight. The All Blacks sevens were up first and regained possession from kick-off, winning a scrum after pinning Great Britain inside their in-goal. Outstanding prospect and player of the day Roderick Solo finished the first half with two effortless tries. The Brits responded in the second half with Ross McCann and Will Homer’s tries, but Joe Webber’s score ensured the All Blacks sevens won 19-12. Earlier, the All Blacks sevens survived a late scare against Australia in their second match, holding on to win 21-19 when Aussie speedster Henry Hutchison dropped the ball when he appeared to running away for the winning try. They thumped Tonga 45-0 in their opener and Webber and Regan Ware both marked the occasion of their 50th World Series tournament with tries. The men’s standings are tight ahead of finals day, with the All Blacks sevens third and trailing joint leaders Samoa and South Africa by three points. The Black Ferns sevens recorded big victories, against Papua New Guinea (58-0) and Fiji (27-0), before taking the field for yesterday’s finale against Great Britain. The rapid Blyde finished in trademark style down the left and right flanks for a magnificent double in the first half. Her second, after New Zealand had spent much of half defending their line, was tough on the Brits, who had several promising attacks repelled. The Black Ferns Sevens started the weekend tied first in the women’s standings with Australia.