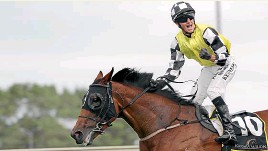 The Roger James and Robert Wellwood-trained filly Prowess prevailed in a strong edition of the $1m Karaka Million 3YO Classic (1600m) at Pukekohe yesterday. Never out of the money in six starts, the classy daughter of Proisir was ridden by expat South African jockey Warren Kennedy, whose compatriot Craig Zackey rode Tokyo Tycoon to win the 2YO Karaka Million two races earlier. The free-striding Prowess ($9) was put into the race before the home turn and went on to score by 0.8 length from Wild Night, with Desert Lightning close up in third. Race favourite Legarto lost her unbeaten tag, but none of her admirers when closing into fourth after enduring a rocky passage. ‘‘I am still pinching myself,’’ Kennedy said. ‘‘Roger James and Robert Wellwood had the confidence in me to put me on this filly when she won at Te Rapa and I was pretty confident coming into today’s race. ‘‘I knew there were some crack 3-year-olds in the race but she did everything right and she showed that she is a filly to be reckoned with. Once she goes 2000m she will be even better so there are lots of things to look forward to with her. ‘‘I just kept her flowing and kept her momentum going and she piled onto the line. She still had a good look at the winning post and about 50m out she started pricking her ears. It was a lovely win. ‘‘For the South African boys to win both milliondollar races is just fantastic and for all the people that have had faith to bring us here and faith in us to put us on these horses, we are delivering and a big thank you to all of them.’’ Prowess’ victory completed a memorable night for Rich Hill Stud, who also stand Tokyo Tycoon’s sire Satono Aladdin. ■ Unbeaten juvenile Tokyo Tycoon came from last to score a stunning victory in the $1m Karaka Million 2YO (1200m) under an inspired Craig Zackey ride. The Mark Walker-trained son of Satono Aladdin continued Te Akau Racing’s stranglehold on the milliondollar feature, with the powerhouse stable having now claimed the past seven runnings. After the gelding was tardy into stride, Zackey made the crucial call to take his mount back to last on the rails and ride patiently. The 27-year-old rider was able to extricate Tokyo Tycoon off the fence and the high-class juvenile did the rest, mowing down runner-up Ethereal Star to score by almost a length.