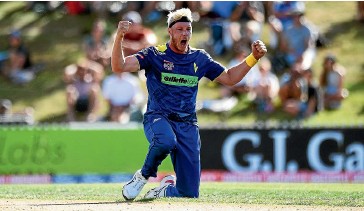 A sensational caught-and-bowled from Matt Bacon has led the Otago Volts to a stunning Super Smash T20 cricket comeback win over the Central Stags in Nelson. Chasing 167 for victory at Saxton Oval, the competitionleading Stags were cruising, but got the jitters, then lost their way completely as a charged-up Bacon pulled off a heroic display yesterday, finishing with a matchwinning 5-28 in his side’s epic four-run win. It had not looked likely. The visitors had posted a seemingly under-par 166-8, thanks only to Dean Foxcroft’s superb 66 off 49 balls, which ensured the Volts reaped 104 off the last 10 overs. His side were then guilty of some wayward early bowling, and with Bayley Wiggins (41 off 24, including four fours and two sixes) getting things moving swiftly, the Stags were cruising at around 10 an over. Captain Tom Bruce looked to be the calm head to get the job done, but he fell for 32 off 21 thanks to Bacon’s remarkable one-handed caught-and-bowled grab, and when he had Brett Randell hole out three balls later it was all on. It left 21-year-old Will Clark, in just his second game, to bring the hosts home. But with 10 needed off the last over, Bacon pulled off three dots – two of them wickets, with Ajaz Patel out to a decent Ben Lockrose boundary catch and Jayden Lennox skying to captain Hamish Rutherford. A frantic bye-run got Clark on strike with nine needed off two, and after pumping another lofted drive for four he needed another off the last to tie, but Bacon came up with a big outswinger that beat the youngster’s big swing of the willow, and the comeback kings were crowned. The Otago Sparks overcame the loss of White Ferns women’s star Suzie Bates (minor injury) to collect a vital win against the winless Central Hinds. Hayley Jensen completed the run chase in fine style for the Volts (136-8), smashing a big six to win the game, despite a few batting wobbles along the way chasing down 130.