US visit did little for Football Ferns

There were good vibes aplenty despite two heavy losses to the world champs, but there wasn’t much gained in terms of the bigger picture. 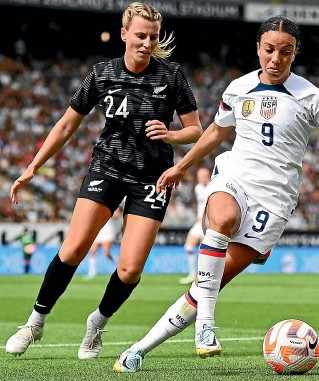 The vibes, it must be said, were good. A record crowd for a Football Ferns match when 12,508 turned out in Wellington to watch the United States beat them 4-0 on Wednesday. Another record when 12,721 turned out in Auckland to watch the US win 5-0 yesterday, with the home team failing to fire a single shot. There was plenty to like about what the reigning world champions had to offer, and some memories that will live forever for a few Alex Morgan fans in particular, after they got to meet their idol. There was also more excitement than there ever has been about international women’s football in New Zealand, which is a positive with the Fifa Women’s World Cup coming to these shores in July and August. That buzz clearly means the world to the New Zealand players, whose previous matches in Auckland have been at venues such as Centre Park and Bill Mckinlay Park, which are a far cry from the national stadium. But it’s hard to look at the two matches and say any progress was made with regard to the Ferns’ pursuit of their two World Cup goals – winning a match for the first time and advancing to the knockout stages, which will likely mean winning another. One saving grace was that the Ferns avoided embarrassment while taking on the world’s best team without a dozen of their top players and those who did play deserve credit for that. Losses by four and five goals were about par for the course and the Ferns’ worst defeat since the programme underwent a big reset in 2006 remains the 6-0 defeat they had to China Guangzhou in 2009. Debuts for Grace Neville, Grace Wisnewski, Deven Jackson and Tayla O’Brien were some of the few positives that could be taken from the two matches. But as far as the bigger picture was concerned, there wasn’t a lot of new information to be gleaned, as the team the Ferns put on park in July is likely to include very few of those who featured. What’s clear now is that several fringe players have probably had their last chance to push for a place in the squad of 23 that will be picked for the World Cup in June. Of those who hadn’t been regulars last year, only Neville and Wisnewski should be back when the team assembles in Hamilton in just over three weeks’ time. And some of those who had been regular squad members, but not regular starters, might now have to watch from afar as coach Jitka Klimkova´ narrows her focus. If there was one bleak moment from a week that could have featured plenty more, it was Ally Green being replaced half hour into her first Ferns start, purely because she was being overwhelmed by the American attackers. She was being played out of position at right back, but the player who replaced her, Ashleigh Ward, slotted straight in at left back, and you had to feel Green should have been given the chance to play in her normal position first. The Ferns will be back in action on New Zealand soil in