With dusty landscapes, brushes with hungry crocodiles and sweeping sunsets, Broome is a vivid and enthralling place to visit, writes Pamela Wade.

The writer was hosted by Tourism Western Australia. Visit westernaustralia.com/nz. 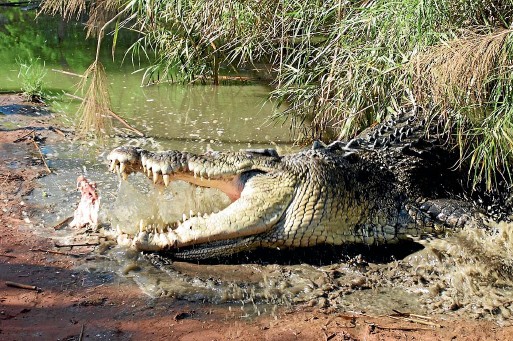 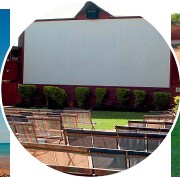 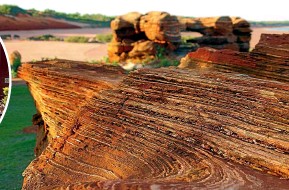 Cutting through mind-bogglingly vast, flat, barren, brown country, from the air the white line of Western Australia’s Great Northern Highway looks as though it goes on forever, though in reality it is little more than 2000km from Perth to Broome. There are plenty of delights along the route for people with time but, with only a few days to spare, the 21⁄2-hour flight is our only way to go. The plane door opens and Broome explodes on our senses: blue, green and orange, hot, eucalyptusscented, dusty and – beyond the bustle of this neat and modern-looking town of 16,000 – it is silent for 1000km in every direction. It is shockingly vivid, and we are relieved to sit in the shade of a huge mango tree at our hotel, where cold wet flannels, iced water and bubbly are a refreshing welcome. A shady and charming bungalow with latticed verandas, Pinctada McAlpine House was built in 1910 as a traditional corrugated iron and timber pearl master’s house, and connects us straight away with Broome’s past. History in Broome is not dry textbook stuff. It is riveting technicolour blockbuster material. It includes blood-red king tides sweeping through town, and Japanese Zero fighters strafing moored flying boats full of Dutch refugees in 1942. It also featured white-suited pearl masters changing their clothes six times a day; Aboriginal men, women and children who had never seen the sea kidnapped in the bush and forced to dive for pearl shells; and ladies sitting in the cinema during seasonal high tides with their feet in buckets to keep them dry. Storyboards on the sides of the town’s buildings – uniformly white-painted corrugated iron, stained orange by the iron-rich pindan dust – tell tales of greed, treachery, courage and endurance played out on the wide streets, and on the turquoise sea that slides beneath the mangroves. One hundred years ago, you could step from boat to boat for 21⁄2km along the harbour edge: 400 pearl luggers were based there, supplying motherof-pearl for the world’s buttons and knife handles, and making rich men of the boats’ owners. Behind the Pearl Luggers visitors centre are two of the few remaining luggers, and in the little museum crammed full of pearling memorabilia, host Michael puts on an entertaining and informative show that includes history, demonstrations, gossip and jokes, as well as a tasting of pearl meat and a chance to handle a $100,000 pearl, which is as big as a marble. It was the huge flat shells that the divers collected: the occasional pearls inside them were icing on the cake for the lugger owners. Meanwhile, hundreds of Japanese pearlers were brought in to wear deep-dive suits for collecting the shells from the bottom of the sea, and given opium to induce constipation during their day-long underwater shifts. Their cemetery has 900 graves. After the invention of plastic killed the demand for mother-of-pearl, Broome went into a decline that was fortunately halted by the development of pearl farming, and in the town lustrous pearls of all sizes and prices are showcased in elegant boutiques, the best-known being Paspaley. Equally desirable are the paintings and photographs in the galleries where the vibrant colours of the area have inspired beautiful prints and originals. They can also be bought at the weekend Broome Courthouse Markets, where stalls set out under the boab trees sell clothing, crafts and food. At the Kimberley Wildlife carers stand there, we watch an orphaned wallaby being bottle-fed while the man who runs the snake recovery service tells us how it took 20 minutes to pull a 1.4-metre python out of someone’s toilet. On the other side of town, on the famous 22km white stretch of sand that is Cable Beach, we meet Connor, fourth in a long string of camels lined up to take us for a plod along the shore. Red Sun Camels is named for what we, and all the people picnicking by their cars on the sand, have come to see: the sun setting into the Indian Ocean in a theatrical blaze of crimson and apricot. Swaying silently along the beach, silhouetted against the sky, we are the focal point for hundreds of cliche but irresistibly iconic photos. We return to the beach next day to visit the nearby Malcolm Douglas Crocodile Park. It is feeding time, and we gaze over a billabong, home to 70 saltwater crocodiles, to watch as 650kg of motionless reptile lying in the shallows is transformed in a nanosecond into a splashing blur when a chicken carcass is thrown over the fence. ‘‘The bite pressure is like a Toyota Land Cruiser falling off the roof onto your leg,’’ we are casually told by the guide. On a value-packed three-hour tour with Broome And Around, we hear more about crocodiles, plus the chilling tale of Shirley and the shark net, as well as more fascinating history and inside stories about the town and its quirkier inhabitants. He takes us to art galleries, past the Oval where men are playing cricket in whites, to Matso’s Broome Brewery for a beer tasting, to Roebuck Bay – the most bio-diverse place on Earth, and to Gantheaume Point to see the 120 million-year-old footprints of a megalosaurus. We watch the sunset and look away from the blushing red rocks just in time to see the fabled green flash as the sun disappears below the horizon. That night we go to Sun Pictures, the world’s oldest outdoor cinema, built in 1903, as a shop incorporating a Japanese playhouse where traditional Noh theatre was performed. We sit on deckchairs under a starry sky as bats flit across the screen. It is warm and relaxed and, at the height of a Vietnam battle scene, there is a sudden roar of engines when a real plane joins those in the movie as it comes in to land at the airport next door. It is a classic Broome moment.