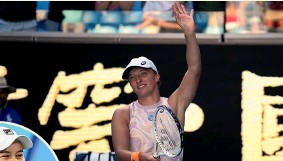 Ash Barty is happily retired and preparing for parenthood but, on the eve of the Australian Open, a chief weapon of the defending champion still frightened the life out of tournament favourite Iga Swiatek. Like the Australian who she replaced as the world No 1, the Polish champion is an avid reader of books and an excerpt from Barty’s autobiography, My Dream Time, was playing on her mind. ‘‘When I played against her, I felt like she just had all these different game styles and slices,’’ Swiatek said. ‘‘Even in her book, she says she has five types of slices. I don’t know how that’s possible. I still haven’t figured out only one type.’’ Barty could make the slice slither and skid, spin sideways or stop suddenly. And the fifth? Shane Warne never revealed how he bowled the ‘‘zooter’’, but there is every bet Barty had a mystery version of her own that befuddled her rivals. Part of its effectiveness is that as the modern-game became more focused on power, fewer women possessed the ability to truly knife the ball in the manner of the reigning Australian Open champion. World No 2 Ons Jabeur, who cut a desolate figure in the corridors of Melbourne Park on Thursday night after being beaten by Marketa Vondrousova, comes closest among current players to using the slice with similar effect to Barty. Former French Open champion Barbora Krejcikova, who plays third seed Jessica Pegula today, is another. Her ability to cut around both sides of the tennis ball was evident in her third-round win over Anhelina Kalinina, with her slice shooting through the court and keeping the Ukrainian guessing. Wimbledon champion Elena Rybakina, who plays Swiatek today for a spot in the quarterfinals, is another with the ability to strike a vicious slice. The comeback of the shot in women’s ranks seems fitting in a tournament where Aussie legend Ken Rosewall, who possessed a masterful backhand slice, is being honoured with his likeness on the official AO coin. Craig Tyzzer, who coached Barty to the world’s top ranking, is hopeful that part of the Australian’s legacy will be that WTA players of the future more frequently use what was traditionally the most common shot on the tour. He said the players of today have been influenced by the generation led by Serena Williams and Maria Sharapova, whose powerful, precise groundstrokes clubbed towards one line or the other took them to the pinnacle of the sport. Barty, with her crafty use of angles and her ability to change the pace, spin and flight of shots mid-rally, struck a different tone. Jabeur, a finalist at Wimbledon and the US Open last year, plays with similar variety. Tyzzer, who has formed a coaching partnership with Barty and Jason Stoltenberg, credits her junior coach in Ipswich, Jim Joyce, for encouraging her to have fun and experiment with different shots including the slice. ‘‘I certainly hope it does create a legacy,’’ he said. ‘‘Jim basically did not put any limits on how she developed and how she played and she developed a slice backhand, a different game style, volleys. ‘‘He did not restrict her in any way, whereas a lot of the girls play from the baseline, hit similar balls and don’t do much different. ‘‘I am hoping we see more of the [Martina] Hingis, [Justine] Henin type of player who can come through and show you don’t have to play one style . . .’’