Jones on James and 105 points in a game 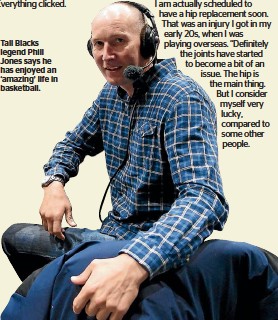 During his teenage years in the small West Coast town of Reefton, Phill Jones played rugby and tennis, and enjoyed fishing and hunting with his dad. Then he discovered basketball and has played against LeBron James and scored 105 points in a club game. The Basketball New Zealand Hall of Fame legend, who lives in Nelson with his family, digs into those magic moments. What are your memories of playing against LeBron in a warm-up game before the 2004 Olympics? He was only young, then. He moved like a freight train, athletic – just a freak of nature, really. A big, solid human being who made basketball look easy (laughs). Obviously LeBron is one of those who is up there as the best ever. At six foot, nine inches [2.06m] he would have also been every rugby team’s dream. What other opponents made a mark on you during your career? (Manu) Ginobili definitely stands out as one of the better ones. He was one player I modelled my game on, because he was a leftie like me and played in a similar position. Vince Carter, Ray Allen . . . I played against the US national team a bunch of times, and there were a lot of players who were superstars in the NBA. In 1999 you dropped 105 points in Dunedin club basketball while playing for the Bowler Celtics. How the hell did you manage that? It’s hard to describe, actually, because the intent wasn’t to go out and score 100 points in a game. It was just another game, the ball came to me off a jump ball, I caught it, had one dribble and shot it. And it went straight through. I thought ‘that felt pretty good’. And it just carried on from there. Everything clicked. You were in Dunedin, and the Bowler, once a famous watering hole for students, was your team sponsor. Did you shuffle along to the pub for a celebratory drink? Yes. It was a Tuesday night. At the end of the evening there were a huge amount of jugs stacked on our table. The next morning I got a call, I am pretty sure it was from TVNZ, to go and do an interview in the morning. And I was extremely ill, even to the point where the interviewer asked me ‘are you sure you are the right person?’ I was shooting, and I couldn’t even hit the side of a barn door. You played professionally in Finland, Italy, Australia and New Zealand and for the Tall Blacks for 14 years. The 2002 world championships, when the Tall Blacks finished fourth, in Indianapolis must have been a highlight? Yes. It still gets brought up in conversation when I meet people, quite a bit. I can definitely say it was probably the pinnacle of my Tall Blacks career. We fell a little bit short, but getting to that semifinal and a bronze medal playoff was pretty special. We were almost household names after that tournament because of the profile we created for the Tall Blacks during that world championship. Any regrets? We have a daughter, Maia, who is off to San Francisco on a basketball scholarship. She is going to take that path with her basketball career. Sometimes I wonder ‘what if I had done that, and gone into that US programme?’ What opportunities would have come out of that? But at the end of the day I have had an amazing life in basketball. I just hope my kids get to do that. You must have run thousands of kilometres on courts around the planet. How is the body after that? I am actually scheduled to have a hip replacement soon. That was an injury I got in my early 20s, when I was playing overseas. ‘‘Definitely the joints have started to become a bit of an issue. The hip is the main thing. But I consider myself very lucky, compared to some other people.